I feel like I was such a crank last year and might have given the wrong impression concerning my feelings about this time of year. I don't hate Christmas...that much. Even though I did write this, which was apparently more popular than the follow-up. And I wrote this a few years earlier (and yes, I am also repeating myself).

To avoid being the Grinch again this year, I wanted to write a feel-good post that focused on the good things I enjoy about the season, but I already did that. So instead of repeating myself (again), I am offering up a few suggestions from my Busy Black Woman Christmas playlist (which happens to be a much longer list than my top three most annoying songs I posted to the FB page by the way, so be still my Grinchy heart).

Unrelated aside: I was perplexed by the accompanying montage on YouTube...as in, this has to be one of the blackest Christmas songs ever, so where is the black baby Jesus??? Here's one (because you're going to need His image in your head as we continue on with this list) :

The Christmas Song, Nat King Cole
No, it isn't called "Chestnuts" which is what I called it when I was younger. Nat King Cole is absolute perfection.

This Christmas, Donny Hathaway
Again, in the category of Blackest Christmas songs you will ever hear, Donny Hathaway's classic is in heavy rotation on the R&B Christmas playlists. If you prefer anybody else's inferior version, it probably won't revoke your invitation to the ugly sweater party, but maybe it should.

Santa Baby, Eartha Kitt
This is the definitive rendition. Every other version you've heard is trash, especially Madonna's.

Christmas Ain't Christmas, The O'Jays
This is classic brown liquor R&B Christmas music. The kind of song that is playing in the background when the old folks in your family have retreated to the basement to play spades. Stick around if you can, and you'll probably learn several family secrets.

Santa Claus Go Straight to the Ghetto, James Brown
This song is the reason why black parents traipse all over town to find the black Santa.

All I Want for Christmas, Mariah Carey
I actually don't love this song at all. It could just as easily go on a list of most annoying songs. But it happens to be a very catchy tune, and if I'm in the right mood, I will happily sing along.

What Christmas Means to Me, Stevie Wonder
There are no good reasons to ever remake a Stevie Wonder song, unless you happen to be Stevie Wonder. He didn't remake this song, which is brilliant, but he did remake Someday at Christmas with  Andra Day, which is a pretty damn good remake.

Sleigh Ride, The Ronettes
On the list of confessions I could make about this song, let's start with the fact that I had NO idea that the Ronettes were a black group until ten years ago! Not that it matters because I loved this song enough to download it to my original Christmas play list. In some ways, that proves music is universal and can bridge all kinds of divides...

So speaking of mind-blowing racial revelations (because this topic came up on Facebook and Very Smart Brothas last week), Bobby Caldwell is still white. And though this song isn't technically on the playlist, his duet with Vanessa Williams on Baby It's Cold Outside is one of the superior versions, and yes it is still creepy as f**k.

Behold the Lamb, Kirk Franklin and the Family
I know I just abruptly switched to religious music after faux cursing, but this song gives me chills and makes me cry and it is one of the best Christmas songs ever. I just learned that David and Tamela Mann were the soloists, and I still love it!

Joy to the World, Whitney Houston
It's no shock that this song made the list because it comes from the best-selling gospel album of all time (still holds that distinction after all these years). This is Whitney Houston in her element and it shows. 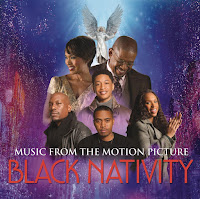 Hallelujah Chorus from Handel's Messiah: A Soulful Celebration
This is the best song to end this playlist because it truly captures every sentiment of the season--triumphant, inspirational, and joyful...and hopefully it reminds you of the reason why we celebrate this time of year. Hallelujah!
Posted by Ayanna Damali at 11:34 AM