If you were following along with me on my personal FB page on Saturday morning, you already know where this is headed...but that was the BLACKEST ROYAL WEDDING since Prince Akeem of Zamunda married Lisa McDowell!

Before I offer my review of the ceremony, let's talk about the diversity of the guests. I expected that Meghan's cast mates from Suits would be there. And I assumed that all of her other famous BFFs would be there, like Serena and Pryanka. And I even assumed that Idris Elba would make an appearance, just because. But somehow Oprah Winfrey was not on my radar at all. As in I never even assumed that they had ever met. Yet, here is the Oprah looking every bit like that Aunt who, because she helped to raise the bride, planned a grand entrance so that everybody would remember her as that Aunt. She took it a step further by causing potentially headline-stealing drama like that Aunt. According to Gayle King, Oprah's original dress was too white, so she phoned Stella McCartney (who was the Couturier for half the guests, including the bride) who responded with this fancy frock.

I won't recap the fashion because we must talk about all of the blackness presented to the Royals in that castle named for them by that presiding prelate that they flew in from across the pond. I expected a sermon despite the fact that Episcopalians typically aren't known for fiery oratory...but I know a LOT of black preachers. And not one of them can resist showing out when the spirit hits, and this AME-ish Bishop showed out! As in where-is-the-usher-because-I-need-a fan-to-keep-from-fainting showed out. He was expressive and animated and took full advantage of having the eyes of the world upon him for that moment. So he preached about love, quoted negro spirituals, made references to social justice, invoked the words of MLK, and I'm convinced that if this had not been a royal wedding, he might have ended by singing. At which point the organist would have been striking those organ chords and somebody would have gotten the spirit. Imagine that...

The choir gave us a taste of blackness with their gospel rendition of "Stand by Me". It was reserved and so perfectly respectable that even as a lifelong black churchgoer, I almost overlooked the artful brilliance of this secular gospel arrangement. Which is why I'm sure no one was expecting that jubilant "Amen" remixed with "This Little Light of Mine" as the happy couple left the church to greet the crowds. Folks were so focused on seeing the first kiss that they missed the soloist who, once released from the duty of demurely serenading the Queen, let loose and oversang her heart out.

It probably isn't all that revolutionary to include a classically-trained black cellist in a ceremony like this, even if his name is Sheku and until maybe the other day he was sporting a generous Afro. Or that he comes from a talented family of seven other classically-trained brothers and sisters (profiled here).

Perhaps it seems rather fitting that the most understated black person in the spotlight was Meghan's mother, Doria Ragland. A few of my friends felt that she was a little too understated in her very safe and conservative formal attire, and while I might agree that she could have jazzed it up a little more, it was probably a deliberate choice not to show up decked out like this:

Because that would have been way too black. Certainly, the Brits are used to a great deal of blackness (having colonized half of Africa and the Caribbean at the height of their empire), I'm thinking that would have been too much for QEII. Mama Dee (my nickname for Meghan's mother) is not a queen, and even if we love to anoint every black mother as such, there is something to be said about making a powerful statement without ever saying a word. To my mind, her statement was her presence for her daughter in the midst of all the family drama that preceded this moment. Mama Dee melted my heart by just appearing to be the rock that every other mother aspires to be for her children. Her tears of joy and her quiet elegance communicated plenty of blackness with a regal demeanor that doesn't require a title.

I watched the wedding coverage again later in the day and I have heard a lot of commentary and analysis of how this moment represents a cultural shift, and I cannot help but notice how people felt similarly joyful back in November 2008. Of course, a wedding is a joyous occasion and as we reflect on what we saw and what we expect (ginger brown babies), I am mindful that this marriage is not about how we see them. It is about what they mean to each other and how those feelings will be nurtured in the years to come. I enjoyed watching that black preacher's sermon, but I also listened very closely to what he said and encourage everyone to take his message to heart--there is power in love. 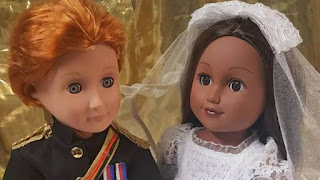 Posted by Ayanna Damali at 2:30 PM