Can I admit to being just a little extra excited about the upcoming Royal wedding on Saturday? That I have selected my fascinator, have chosen my tea cup, my outfit, and have enlisted my Dad to record it for me? That if I thought I could get away with it, I might wake up the kid at 5am to have her watch it with me (because I think that when she's older she will appreciate me for that)?

OK, so I am exaggerating a little...I had to select an outfit for the program I am hosting later that morning at my church (which is why I have my Dad on standby to DVR the wedding for me, in case I have to leave before all of the pomp and circumstance have ended). Which is why it is an open question as to whether I should have the kid awake with me so early in the morning. But it is true that I have a fascinator and a tea cup at the ready. 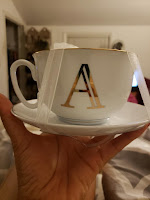 I recently watched old footage of Charles and Diana's wedding, which I recall watching some 30+ years ago (but I'm unsure if I saw it in real time). I was six or seven and believed in fairy tales back then. I think I saw some of Sarah Ferguson's wedding to Prince Andrew, and you know that I watched Will and Kate's wedding. Not sure why other European monarchs generate less interest, but I think it has something to do with that war Lin-Manuel Miranda has us all singing about (and mortgaging our houses to see onstage).

Putting aside all of the inherent contradictions of being an African American woman with enough education to appreciate the irony in the archaic persistence of the British monarchy, the post-colonial tensions of being a former empire, and Brexit, I'm deliriously happy for my girl Rachel. (Because yes, in my head, we are friends and I just can't be there in person because of my other obligations this weekend). I can't wait to see a sister-girl in the British royal family!

I already know that there are some who read that last statement and have all kinds of reactions, so let me address this by saying the obvious--so what if she self-identifies as biracial and not explicitly as black? Y'all do realize that she's a woman of color and an American and a divorcee and a commoner? She's also young enough to have been born in an era when folks have the luxury to self-identify which I'm clear is most common among folks from California.

But I get it. Much of the same frustration that has been expressed about interracial liaisons is this issue about how people get to align themselves. Somehow we (and I am talking about black folks) believe that the choice not to call oneself black is a repudiation instead of progress. But let's be clear, Meghan knows who and what she is. She knows that the eyes of the world affixed upon her is not because she identifies as biracial--it is because she is black. And has crazy drama that has been stirred up by her daddy's family...

This is not to say that she doesn't have some Compton cousins who haven't tried to scam a trip to London in order to sell tee shirts. They might have tried it, but I have a feeling that Mama Dee (my nickname for her mother Doria Ragland) put a clamp down on that precisely because she was not about to have any foolishment going on in front of the entire world!

Would we (America and the rest of the world) have cared this much if Harry had finally married the other girlfriend, Chelsy Davy? It isn't as if the woman Harry marries matters in the grand scheme of royal succession since he won't be king, barring some catastrophic apocalyptic turn of events that wipes out everyone else. So he could marry for love (or not marry at all). Maybe another random American actress or socialite would have generated some modest interest, but I doubt that. We already forgot that one of the housewives claims to have made out with him (which I had to google because I forgot about her too). Several other royals have gotten married since Will and Kate, and we haven't lost any sleep over them.

And I assure you that the number of black folks who are on the program and on the guest list are the telltale winks and nods to how Meghan Markle identifies. There is a black cellist and a gospel choir. There will be a black preacher. One of her BFFs, Serena Williams, is expected to be there. The Obamas aren't going so as not to instigate an international incident with President Trumpelthinskin (who would have found some ridiculous way to try to upstage them) and Melania can still host that pajama watch party from her hospital room. I'm guessing that Idris Elba won't be there only because there is a limit on the number of sexiest men alive allowed in one place at the same time.

I don't know why some of us are so convinced that blackness has to be defined in such narrow ways, like the folks who argued that Barack Obama wasn't really black "like us" because his father was Kenyan (or that he had no street cred because of his Harvard pedigree and Kansas-born white mother). Or that Caribbean blacks are not like us either even though their ancestors suffered the same Middle Passage journey. Or how Latinos aren't products of a racist system either, the difference being the language of their colonizers, also European in origin by the way. Or that we have to be protective of American blackness in such a way that it alienates us from other women of color as if our experiences with sexism and racism don't intersect. Trust me, Meghan hasn't fixed British racism and won't be immune to Old World attitudes or elitism.

But she will be marrying a Prince who is descended from people who once colonized half of the known world. If nothing more, she becomes one of the most visible symbols of how the world can change--not if we ignore race, but once we embrace and celebrate love. 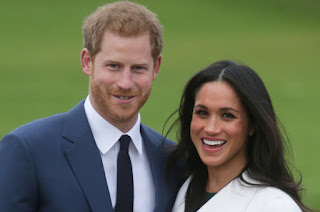 Posted by Ayanna Damali at 3:13 AM