Whenever Black History Month comes around, I feel the impulse to produce a project or write a report, like I always had to do when I was growing up. I would select some notable(s) to highlight and then spent the month immersing myself in their life story. Right now, several of my Facebook friends are engaging in a similar exercise based on a theme for the month, such as HBCUs, famous Black women, Blacks in STEM (which once featured my Dad a couple of years ago, so that was cool), etc. The great thing about these social media Black History Month presentations is that they can reach a much broader audience than just our peers.

Last year on the blog, I revived that practice when I posted my first mini-series Blacks in Fashion on the contributions of African American models, designers and fashion influencer. My "project" was inspired by a random tweet I saw about the life of fashion designer Ann Lowe and the coincidence of New York Fashion Week taking place at the same time. There will be a another installment of that series as well, but in the meantime, I decided to put together another series that I am calling "Black on Broadway". 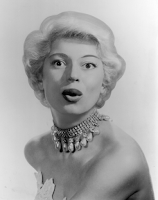 The impetus for this series was the recent death of singer and actress Carol Channing last month. In her memoir published in 2002, Just Lucky I Guess, Channing revealed that her father was Black, a fact that was ignored or downplayed in many of the obituaries that honored her last month. I thought that was odd...and while I still wonder why so many so-called respected news outlets (like NPR and the New York Times) chose not to address that aspect of her life, it also made me wonder about her contemporaries who could not pass.

I haven't read the book, so I only know about this late-in-life revelation from interviews, like this one she gave to Larry King that was recounted in The Root. Well, my reaction isn't to claim her with wide open arms because this was not some surprise she encountered late in life, but something she learned as a teenager. And then she went on to pursue a career on Broadway as a white woman! Am I the only person who is frustrated by that???

In order for people to truly appreciate my frustration, when Pearl Bailey reprised the role of Dolly Levi in Hello Dolly in 1968, the breakout role that made Channing nationally famous in 1964, it was in an all-Black production. It was common for certain works to be race-recasted (my word for revivals that feature a cast of one racial or ethnic group), but in this clip where Channing introduced Bailey's performance at the Tony Awards, she made no mention of her own ethnicity:


Instead, Channing continued to live with her secret and the privileges that came with it. By the time I was introduced to her on children's TV shows such as Sesame Street and The Muppet Show, opportunities for Black actresses had expanded. But by waiting to talk about her father's ethnicity until she had reached the twilight of her career, she escaped the racism and limitations that had been placed on her contemporaries. Lena Horne (whom I also encountered on Sesame Street and The Muppet Show before seeing her bring down the house in The Wiz) comes to mind as one of the primary examples of an actress who was courageous enough not to pass--and whose career reflects the realities of that choice.

So for this month's series, which will run on the Busy Black Woman social media pages, I will highlight several of the Black women who had careers on Broadway during Channing's time, but also several who are making names for themselves currently. It will run on Wednesdays starting next week (because this first week of Black History month has been crazy) for the remainder of this month and next so that we can also make use of both Black History and Women's History Months. The index with all of the links will be posted at the end of the series.

In the meantime, let's go out on a high note (pun intended). Enjoy this clip of Carol Channing and Pearl Bailey performing "Hello Dolly" together: