February is Still On!

Friends, this has been one Hell of a month. In all of my years, I cannot remember a February that has been this tumultuous and unsettling (and y'all know I'm getting up there...I'm practically dead in cat years). But this has been one of the most bizarre and disturbing months of the Trumpacalypse which is a pretty big deal considering every month, week, day, hour, etc., since this nightmare began has been insane.

But there is something extra disrespectful about this February. I don't know if it was another New England Superbowl win, that JLo tribute to Motown, or the fact that the weather cannot decide if we're getting an extra six weeks of winter, but it has been cray cray up in here! What is going on Universe? There are some things that are supposed to be immune from cosmic calamity!!!

Like Black History Month, dangnabbit. We are supposed to be honoring and revering ancestors. We are supposed to be teaching our children great Black facts. Everybody is supposed to be wearing their best clothes and shoes, have memorized their speeches/dances/presentations, and eagerly awaiting that moment when our names are called for us to stand before the assembled masses to give the performances we spent all month preparing. THIS IS THE MOMENT!

Instead, we're too distracted by tomfoolerly and whatnot. Blackface. Sexual assault. Career suicide. Another Madea movie. Bernie Sanders. We have one more week in this month, then as you know, we get the blur of Spring, a week of summer vacation, and then after Halloween I'm back to complaining about Christmas. This year is already over.

Not if I have anything to say about it! That is the entire point of Black History Month--to honor those who came before us, those who had less than nothing and still held on. You want this month to be all about those who triumphed, but that isn't even half of the story. We need to also remember those who survived.

Sure, we want everyone to celebrate the great names in Black History. But we need to take time to remember those slave women who took the scraps of fabric and fashioned them into quilts. Sewn and stitched by hands that had spent the daylight hours picking cotton or tending to children who weren't theirs. There was love sewn into those quilts that recorded family stories, but there were also messages that communicated to runaways where they might find safety along the journey.

We need to remember that slaves were illiterate, but they were not stupid. It was illegal to teach slaves to read, but teaching them to obey according to an abridged bible was acceptable and encouraged. So they interpreted those messages of obedience as hope that if God could deliver Daniel, then why not every man. They recognized the parallels of their bondage to the Children of Israel, so they sang of Moses. And even if they would never escape the trials of this life, they would get to Heaven anyhow.

I know, we don't want to think about slavery because we're supposed to be ashamed of that past. We're supposed to be angrier at our African brothers who sold us into bondage, because the only thing the Europeans did was carve up the entire continent and teach you that your ancestors were savages. We're supposed to think like Killmonger, that it would have been preferable to perish in the ocean. But if we had done that, would there have been soul food or jazz or hip hop? We wouldn't see the vibrancy of African cultures re-imagined in Caribbean island paradises. There would never have been a Harlem Renaissance or a Black Arts Movement.

Now I get it. You want Wakanda, not Chocolate Cities that are quickly becoming Latte Cities. You would rather complain about our displacement instead of standing your ground. You like those low prices at Walmart. You aren't going to support HBCUs that can't seem to properly manage their affairs. You would rather attend the megachurch with the celebrity pastor who drives a Bentley than the historic Baptist that was built by slaves. I see what you want for your Black History Month.

That's why y'all are crying all over social media that the month has been ruined. Because Katy Perry put out an ugly pair of shoes. But apparently, you don't know how your grandmother walked for miles in uglier shoes to work in someone's kitchen to put her kids through school. You think boycotts are a waste of time because they're inconvenient, so you went back to watching the NFL because what else are you supposed to do on Sundays, read a book? You forgot that you had relatives in Montgomery who stayed off of segregated public transportation for more than a year.

You mad because Jussie Smollett's hate crime story unraveled faster than a ball of yarn? We're all upset about that, but he wouldn't be the first Black man to tell a tall tale. Read some Zora Neale Hurston and you'll see what I mean. Apparently, Megyn 'Jesus-is-white-and-Santa-too' Kelly was right about blackface being cool among white kids in the 80s. So what? Did you actually believe that post-racial sweetener they were serving at Starbucks was real sugar?

You want Black History Month to be a celebration of all the isht you never had to experience. You want the film version that has a happy ending. You forgot that in between the paragraph on slavery and the page about the Civil Rights Movement, our people still lived in this country and went through hell. It was living through that hell that gave us the triumphs we want to trumpet. That's why you need to listen to all three verses of Lift Every Voice and Sing because it was the God of our weary years, the God of our silent tears...who brought us here. We don't get from February to February on the highlights and the trivia. We make it through the struggle. 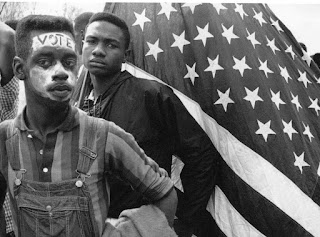 Posted by Ayanna Damali at 3:25 PM