I grew up with Christopher Reeve as Superman, so as far as I am concerned, he is was and forever shall be the iconic superhero. I know that meant he was typecast in my eyes, and that I probably never saw him in any other memorable role until his later years as a advocate for people with spinal cord injuries. Until Billy Dee Williams appeared onscreen as Lando Calrissian in The Empire Strikes Back, I would say that Reeve was my first blockbuster movie boyfriend.

So when Sundance TV aired a marathon of the four original Superman movies, I got excited. I loved the first two movies! And I had tuned in just in time to see the ending of the first movie, so that meant I would get to see the second film (which had been my favorite) in its entirety. Yay, happy Sunday for me!

But, I fell asleep midway through the second movie; woke up in the middle of the really bad third film; and slept fitfully through the gawd-awful fourth movie. Before I pulled the covers over my head during a particularly ridiculous scene in the second film, I tweeted how terribly sexist and dated it was. Honestly, I'm unsure if I could ever sit through this again...

Mind you, I get how movies that were made in certain eras are cultural reflections of that era. The 70s were a gritty time, so a lot of those films had a gritty edge to them. I wouldn't describe Superman in that way, but its marginal treatment of women was typical, such as the catcalling, depictions of maidens (and their cats) in need of rescue, and other subtle forms of sexism that would be more noticeable to modern sensibilities. That Superman was a product of its time is how we can suspend belief that a self-aware career woman like Lois Lane was too love struck to notice that her bumbling colleague was the man of her dreams. 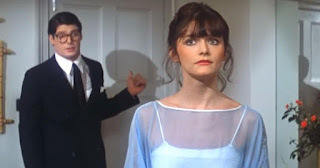 By the time we get to the second movie there was progress, some recognition that women could be more than damsels in distress; in fact, the women were pivotal to the narrative. From the wisdom provided from beyond the celestial grave by his mother Lara, the conflict stirred up by the evil Ursa, the comic relief supplied by Miss Tessmacher, to the undying love of Lois Lane, women were integral to Superman II. The fact that each left some manner of chaos and confusion in her wake...well, that wasn't necessarily a bad thing.

So my complaint is not to whine that the women were used to illustrate the need for a super-man to fix things (but hmm, that's a theory worth exploring). My gripe is that the women were used poorly to illustrate that point. Specifically how one woman in particular, Lois Lane, is set up as Superman's one true weakness. Delilah to his Samson, otherwise known as the old sexist trope that a man would forfeit his nobler, higher calling for sex.

A quick refresh of the biblical reference (Judges 16): Samson is the Israelite champion who falls in love with a Philistine woman named Delilah. She seduces him to learn the source of his strength, and after a few false leads he tells her, she neuters him, and then delivers him to his enemies. He repents, receives enough strength for one final showdown with the Philistines, and then kills them. I will give you a minute to think about the parallels to Superman II (as I try to figure out why I am still working on papers for my Images of Women in the Media class).

I started to formulate this theory when the kid fell over the rail during the Niagara Falls scene. Of course because Clark Kent was in the vicinity, so was Superman; meanwhile on the moon at the same time, the Zod Trio started with their mayhem. And Superman was clueless. He remained clueless and preoccupied until that humiliating beatdown at the diner...at least a week later.

How did he miss the hostile takeover of the planet by three super aliens before he gave up his powers? When the kid fell over the railing, was there no other way to save him without suddenly appearing in Niagara Falls and blowing his cover? On the trip back from the Fortress of Solitude, was there no news on the car radio? Did everyone forget that this entire chain of events was set in motion because Superman decided to fly to Paris to save Lois Lane (again)? Instead of seeing Superman as some kind of romantic hero with gallant tendencies, perhaps we should see him as a super stalker?

Are you hearing that Sting song in your head yet?

Of all the bad things that could happen anywhere in the world, Superman would only be available if it impacted Lois. His obsession began in the first movie when he spun the world backwards, not to stop the nuclear bomb Lex Luthor had released, not to save California from the big earthquake, but to save Lois. He ignored the advice of his mother to give up his superpowers in order to be with Lois. While the leaders of the world were surrendering to the Zod Trio, Superman was tangled up in bed at the Fortress of Solitude with Lois. He got his ass kicked at a diner by some hick townie in defense of Lois. His enemies all correctly determined that his Achilles heel was Lois.

And in a classic gas-lighting maneuver, we're supposed to accept that all of this chaos was her fault. His choice to always save her from danger. His choice to reveal his secret identity. His choice to become mortal without consulting her. He got what he wanted from her...but she's selfish and jealous of the whole world (her words). For all of the crazy he brought to her life, he decided that the cure for her heartbreak was a hypnotic kiss--to help her forget about him. No way would the Man of Steel ever admit that he had caught feelings.

I know, feminism ruins everything! Or maybe it is the fact that I have grown up, and after nearly 40 years of watching this movie, it is finally time to see the truth that has been right in front of me. This was not a great superhero movie, nor was it a timeless love story. Could it be that after all these years, the object of my love was really Christopher Reeve, and not Superman, his alter ego?