While listening to the radio in the car on the way to get the Kid from school, I heard a snippet of a news story about the controversial decision made by Cook County State's Attorney Kimberly Foxx regarding the Jussie Smollett mess. I didn't stick around to hear the details, but generally I know that she has been accused of bungling the case. Maybe she did, and if so, I suspect it wouldn't be the first time that a prosecutor had to back down after some big talk...

However, for some reason that snippet made me think about the static that Baltimore State's Attorney Marilyn Mosby faced when she stood up to the police union in the Freddie Gray case. And how State Attorney Aramis Ayala had her prosecutorial decision-making challenged by then-Governor Rick Scott (R-FL) because of her opposition to the death penalty. And how everyone seems to think that they are entitled to an opinion on the intellect of Rep. Alexandria Ocasio-Cortez, even the Petty POTUS, who dissed her New Green Deal proposal because of her previous job as a bartender.

Today, now that Lori Lightfoot, a Black woman has been elected to the Mayor's Office in Chicago, I am wondering how long it will take for someone to be as openly disrespectful to her as the President has been to the Mayor of San Juan, PR. Because it is only a matter of time before the powers that be in the Illinois General Assembly decide that they will intercede by hostile takeover of certain local functions (similar to what is currently being proposed in Georgia with respect to Atlanta's Hartsfield-Jackson Airport)? Because disrespect for women of color in power isn't just the prerogative of the President...

Everyone feels entitled to question the competency and qualifications of women, especially women of color. EVERYONE. I remember years ago how in my third year of law school, the only Black woman on the faculty was criticized by several of the students in our criminal procedure class. While it has been too long for me to recall the exact complaints, the grumbling about her got to the point that she opened class one day with the declaration that she was the only person in the room with not one, but multiple law degrees. Years later, and everywhere I turn, there is some version of that same scenario replayed at every level of society.

Like the time that little boy on the playground proceeded to tell me what I needed to tell my daughter. Or how a certain person thought that his suggestion that Sriracha was a suitable substitution for red pepper flakes was appropriate. Or how men who have never given birth to children feel compelled to decide whether women can make child-bearing decisions for themselves. Or how the women who are currently running for President with stronger credentials than most of the men are held to a higher standard than the current White House occupant--the same joker who has barely enough foreign policy expertise to fit into a thimble, yet he feels compelled to give advice to women who are running countries (not country estates).

So yeah, I am offended by this high profile criticism of Kimberly Foxx, even if she did screw up with Jussie Smollett. How dare she allow some celebrity to get away with telling a lie???

Unless she was hired to clean House. 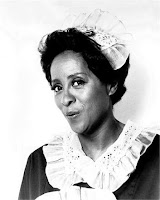 And even then, someone is going to feel that it is his job to question how she does hers. Someone who didn't want the job in the first place, but now that he sees her doing it, he knows better than she does.

Like the men who sold the UK on Brexit but couldn't be bothered to stick around to make it happen. Like Rahm Emanuel, who claimed he didn't seek reelection in order to spend more time with his family, but we know better. Like the POTUS who talks tough, but who would rather send the women from his Regime to Capitol Hill as messengers: Betsy DeVos to explain why his budget cuts out federal funding for the Special Olympics and Kirstjen Nielsen to explain why children are detained in cages.

Just like every other man who decides that instead of picking up his own dirty socks, he'll leave them for someone else.
Posted by Ayanna Damali at 1:13 PM