Red Beans and Rice Monday: No Offense, But...

When I say us, I mean women in general. We are expected to allow this.

'He's just being friendly.' 'He kisses everybody like that.' 'He doesn't mean any harm.'

Just like the Bishop didn't mean any harm when he felt Ariana Grande up in front of millions during Aretha Franklin's homegoing. And I believe he believed what he said, even if his hands were operating on their own accord.

So let me offer this quick word of political advice to Mr. Biden in case he does decide to move forward with this bid to become President (for the fourth time...): Ask. 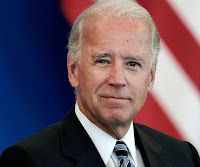 Not because we are in an ultra-sensitive era where seemingly innocuous expressions of affection are now regarded with suspicion. Not because the person whose hair you are about to sniff might be a vocal supporter of a rival campaign. Not because it wouldn't be cool to say that #Itoo got to rub noses with Uncle Joe. Not because Barack Obama has warned us that the perfect is the enemy of the good. Not because current the Groper in Chief (currently being sued for getting too close and personal with a former staffer) is poking fun at you in order to deflect attention from the fact that he is a horrible excuse for a human being.

Ask, so that there is no ambiguity that you aren't invading someone's personal space.
Ask, to demonstrate that you respect that not everyone is comfortable in every situation.
Ask, to prove that you understand the concerns that have been raised by those who felt uneasy about your displays of affection in the past.
Ask, because it would be a shame if this drama overshadows your political legacy.

And one more thing...really apologize to Anita Hill.
Posted by Ayanna Damali at 11:37 AM