This past Easter Sunday 2019 (April 21) was the third anniversary of Prince's transcendence, so I spent practically all day Easter Monday putting together what I thought would be a 'quick' tribute on the Busy Black Woman Facebook page. The next thing I knew, what I had intended as a few songs morphed into a retrospective of 20 songs selected from albums released from 1978-2004 in chronological order. Then came the intention to recapture what was posted on social media in the form of an index. Then the effort to highlight just those 20 songs became another full-blown tribute with LOTS of bonus material published in two parts!

So here is your roadmap although when it comes to Prince, nothing ever follows an exact plan: (a) The first tribute written contemporaneously when I learned of his untimely passage, (b) the second written for what would have been his 60th birthday last year, (c) and now this unpredictable, unwieldy, and utterly overwhelming index/playlist that I plan to post annually on these dates of remembrance, April 21 and June 7.

For You (1978) - Crazy Fool
The song that gets most of the attention from this album is the one that would introduce Prince as a sexual provocateur, which is how I made the mistake of overlooking this album. Thankfully, I discovered this gem of a song that is so short and sweet, and that hints at that other side of Prince as a lover of love, the hopeless romantic we encounter on some of his underrated ballads.

Prince (1979) - I Feel For You
I first heard this song when it was a hit for Chaka Khan in 1984 and while I knew Prince had written it, I had no idea that he had recorded his own version of it until years later. There are reasons to love both versions, and while I don't have a preference, I will say that the two made beautiful music together as evidenced on Journey 2 The Center of Your Heart from her Come to My House album in 1998.

Another favorite from this album is the classic I Wanna Be Your Lover. I swear this is the video that inspired the infamous meme about Prince and rompers.

Controversy (1981) - Do Me Baby
Again, this was a song that I first heard when it was recorded by Meli'sa Morgan in 1985. I believe it was one of my first 45s...and thinking back on how old I was when I bought it, lawd what did I know?! I can't choose a favorite between both versions.

1999 (1982) - International Lover (1983 acoustic version, previously unreleased)
I LOVE this album. Of course it contains well-known favorites and classics, and is the foretelling of Prince's commercial success for the rest of the decade. In the tradition of great Prince slow jams, the original version of International Lover is one of the best, with its metaphorical conjuring of the mile high club (aboard the "Seduction 747"). Then there is the other side of the same coin, Lady Cab Driver, which is a dance jam that evokes the same brazen lasciviousness, but on terra firma in her "mansion" somewhere. Both songs are sexy as fuck. 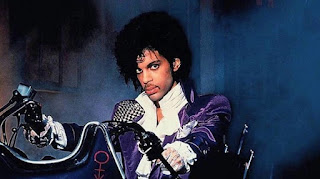 Purple Rain (1984)
For the record, this can be your favorite Prince album just as long as you don't call yourself a die-hard fan. That statement doesn't detract from the greatness of this project (which includes the movie); it just puts into context how one defines Prince fandom. Most of us became Prince fans because of this album, so it is more accurate to describe Purple Rain as the portal, not the summit.

With that disclaimer made, my surprise favorites from this project are found in its prophetic dance numbers (captured in these live performances) of I Would Die 4 U and Baby I'm a Star. In essence, Prince told us what to expect from the career that would unfold: I am a star and I would die for you. He was and he did.

Around the World In A Day (1985) - Raspberry Beret
I skipped this album in the Facebook tribute, but now that I have jumped into this rabbit hole, this video and the cover art demonstrate Prince's mastery of visual imagery. This has always been one of my favorite videos so when I discovered the Beatles years later, it clicked that this was a homage to their iconic cover from Sgt. Pepper's Lonely Hearts Club Band. And the fact that a similar allusion was made by a real music critic back in 1985 has me feeling some kind of way.

Parade (1986) - Kiss
When I started this tribute in the car on the way back from dropping the Kid off at school, it was without a plan or a roadmap of how this would unfold. This song was my first choice because in the vast universe of Prince music, it is one of the most accessible and cleverest dance jams--one that lends itself to various live interpretations. From the same album there was Anotherloverholenyohead, just because in the ever-constant reinvention of his image, this video gave me David Bowie vibes.

My thoughts on Under the Cherry Moon, the movie for which this album was the soundtrack... #nowords

Sign O' The Times (1987) - Adore
Although not included in the original Facebook tribute, this song is THE quintessential classic Prince love ballad! It is not just another great slow jam about having sex (an entire genre that he redefined), but it is about the emotions that transcend love, on levels that are indescribable, other-worldly even. So between lines that declare love is too weak to define just what you mean to me and I've got to have your face all up in the place...this song is unparalleled. And whether they realize this or not, lots of Millennials owe their existence to it!

Lovesexy (1988) - When 2 R in Love
On an otherwise solid, but overlooked album (because it is overshadowed by Sign), this song demands attention. It is also included on The Black Album (recorded at the same time, but not released until 1994). For me, there is an echo of Purple Rain.

Batman (1989) - Scandalous
Then there is this song...and if I were putting together a Prince slow jam mixtape/playlist (which I did back in college), this song is the climax, pun intended. I wonder if I still have that tape somewhere along with the entire Scandalous Sex Suite...

After listening to that song, you should need a cigarette or some other kind of break. Stretch. Take a short nap. Get a snack, and then come right back for Part Two!
Posted by Ayanna Damali at 7:00 AM