All weekend the buzz on Beyonce's internet was the music video for WAP, the highly stylized duet released by rappers Cardi B and Megan Thee Stallion. And I don't have much to add to the chatter since I am way too old to attempt a split anymore...

I have NOTHING to say about this video or this song that will change anyone's opinion, so this is purely a vent about some of the nonsense I have read on social media. I am not here to take sides in debates over respectability. There is no point in making those arguments if there are white men in elected office who would publicly refer to an accomplished Black woman who could become the next Vice President as an Aunt Jemima. So if your expectation is that I will join the chorus of pearl-clutchers who are appalled by the video, you might want to skip this.

However, I am not going to refer to it as an artistic masterpiece either. If I never hear the song again, I will survive. I definitely will not be caught drunk twerking to this, not even if Joe Biden wins in a landslide and that causes Donald Trump to literally explode into a million pieces that get immediately scattered to the wind and washed away to Antarctica. I mean, I would be that deliriously happy, just not that limber.

Instead, I want to respond to the rhetorical question I saw posed in one of my Facebook groups about women's sexual expression. Some dude wanted to know if anyone from Spelman regretted the decision to make a big deal out of Nelly's Tip Drill video if twenty years later, WAP doesn't offend us in quite the same manner. Weren't the women in his video similarly as empowered as Cardi and Meg? And was it worth the pain and suffering to deprive our Morehouse brothers of a chance to see the great rap stylings of Nelly? (Yeah, that last sentence was totally my interpretation of what he really meant.)

First of all, that incident did not happen twenty years ago. It was 16 years ago because dammit I am not that old! However, I remember it well because I was the President of the local alumnae chapter, and we were very proud of the stance taken by our younger sisters at the time. I was not a Nelly fan at the time, nor have I become one in the years since, so as far as I was concerned then and even now, it was no big loss for him not to come to our campus. It was the students who decided that as a condition of his visit, he would have to be held accountable for the explicitness of the imagery in his video. They were willing to proceed with the purpose of the event, which was to host a bone marrow drive to highlight the need for more Black donors, particularly since his sister was in need of such a donation. It was then his choice to cancel the drive because he didn't feel that he needed to submit to that kind of scrutiny.

Choices were made. Consequences followed. Ain't nobody talking about Nelly these days, so there really isn't a need to revisit that incident as some kind of life-altering regret.

As for the clumsy comparison of a woman's behind being used as a credit card swipe to Kylie Jenner's unnecessary cameo? Why is one depiction choice while the other depiction is exploitation? If that was in fact a serious question, then I will provide a serious answer: because we say so.

Women decide. And not the Aunt Pittypats of the world who are scandalized by white shoes worn after Labor Day. WE as in the women who decided that winter white would be a thing because some rules are just stupid. WE decide.

We called Nelly out because he assumed that he didn't have to explain himself to a bunch of college students whose campus he wanted to use as a backdrop for a photo opportunity. Folks who don't give a damn about women are really good at finding ways to exploit us by making it look like they are doing us the favor by being charitable. The first sign of disingenuousness is the invocation of having a daughter (or a mother, wife, sister, or a sainted Big Mama) as evidence of his respect for women. The second sign is the loud, incredulous response to being called out, which usually includes a few targeted insults, typically delivered as fake compliments. And then there is the non-apology because if you were offended at being called a bitch, that certainly wasn't the intention...

Yes, there is a difference when the song is written and performed by women. Cardi, Meg, and Co are making the artistic choices. The women are in charge and that is the difference between choice and exploitation. Sure, there are provocative images in that video that stretch boundaries and blur lines...

So let's address that too. Yes, I am referring to the more explicit video for Blurred Lines (not this one, but the other version), the song Robin Thicke and Pharrell released in 2013. With every man fully clothed in the video while the women prance around naked, yeah, I'm calling that exploitation with a capital E. My choice to use that word is supported by the description offered by model Emily Ratajkowski, who appeared in both versions.

Sure, it was her choice to take that job, and I'm not upset at the women who choose to appear in these videos. What offends me is the gaslighting that accompanies their performance. It is obvious that the men aren't engaging with these women as anything other than props. Swiping a credit card in a woman's behind is not suggestive flirtation. A credit card reader is an inanimate object. So even if they consented to being objectified, that doesn't mean any woman deserves to be treated that way. Alternatively, in the women's videos, men are ancillary but rarely dehumanized. If anything, because the camera is tightly focused on exaggerated parts of the women's anatomy, it reverses the power dynamic.

Does my defense of these women mean that I want my daughter to emulate them? Yes, and allow me to parse that out like this: I want my daughter to make her own choices and then to deal with the consequences. I will defend her right to choose, even when I disagree and dislike the result. No, I wouldn't want my daughter to dance in any of these music videos, but that is my preference. Instead of judging me, would you want your sons to emulate the disrespect these men show the women in their videos? Are those the type of young men you are raising?

We admonish young women to take responsibility for how they are treated, but never hold young men accountable for their actions unless they are criminal. If you can find the time to sit down to write an opinion piece about leggings, then surely you can find the time to teach your sons how to respect women. You can teach your sons that no, a woman's body is not a race track for his toy cars and that isn't the kind of man you want him to be. You can tell your son that if he respects women, then he won't dehumanize a woman he disagrees with by referring to her as a female dog, nor will he half apologize for that insult by suggesting that it is her fault for being offended. And you will teach him not to hide behind his love for you as a defense for his bad behavior. 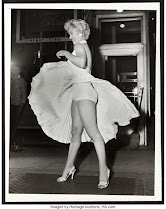 Am I misinterpreting the outrage here? Women with sexual agency aren't as respectable as Marilyn Monroe with her skirt flying over her head or with her breasts popping out of her evening gown? Or am I right that the real discomfort comes whenever women take charge of shaping their own public personas. That a woman who declares what she wants and what she likes is vulgar...

But let's go back to where this started, which is the video. I have my issues with it, particularly the sample that refers to there being 'whores in this house' because that does offend my sensibilities. I do not appreciate that implication. And no, I will not be showing this to my daughter as some kind of teaching tool. I don't care for this brand of hip hop, and I agree that as a mother, it is a challenge to see images like this when trying to raise a girl to accept her body as beautifully and wonderfully made.

However, I will model for her the image of a strong, confident, accomplished, and sexy woman, just as my Mother was to me. I will set boundaries and expectations, but I will also encourage her independence. I will teach her that when women are in control of our own bodies, our minds, and how we present ourselves to the world, We Are Powerful. WAP!