Babar the Babarian and Other Children's Stories

On a recent night, I took on the bedtime duties for my daughter, and as is our practice, I chose a book. Like most children, she has a few favorites, but I usually let the Hub get caught in that repeat loop. Instead, I choose a book at random, just to introduce some variety. We have a mix of books, including several that were mine as a child, so every now and then, I will pick one of those titles to introduce her to some beloved character from my youth. 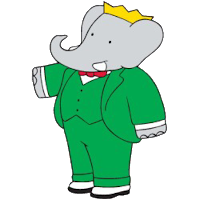 On this particular night, I chose The Story of Babar. It was not the best choice...

At one point, I actually had to stop and comment on how peculiar certain events were, and my daughter agreed in the manner that six-year olds understand things. After we finished reading, she turned over and went to sleep. As soon as her eyes were closed, I pulled out my phone to check in with the omniscient Google, because somebody else had to recognize and deconstruct the various problems of the original story. Sure enough, I saw where there were some criticisms mentioned on its Wikipedia page, as well as a few articles that addressed the controversies more in depth. One of the best articles I read was this anti-imperialist take written in 2017 wherein the author does an excellent job of highlighting the subtle racist and sexist elements in the original Babar story. I sat there in disbelief--how was this my first time noticing any of this? Hence, another salient point made in the article, that the subtlety and simplicity of the imagery had us all hoodwinked, bamboozled, led astray, run amok!

Since others have done the heavy lifting in pointing out how this beloved children's classic, written in 1931 by French author Jean de Brunhoff, is very much reflective of the time in which it was created, there is no need for me to reinvent that wheel. The Story of Babar becomes problematic from the moment his mother is killed and he runs away to freaking Paris...all the way from Sub-Saharan Africa??? Some unnamed rich Old Lady just hands her purse to a random elephant on the street and then moves him into her house? He marries his younger cousin? He returns to become King of the Forest because he mimics the humans and no other Alpha male elephant in the pod challenges that? And the lions just accept it too? WTF?

But I'm not here to denounce our beloved anthropomorphic literary and cartoon characters. Because there is still a 35+ year old copy of Babar on my daughter's bookshelf. I know that my Grandmother probably read it to me, and possibly my Aunt E (who taught Kindergarten for decades, so that was me and hundreds of other kids). Actually, my introduction to Babar was through another story, Babar Loses His Crown (1967), which we had in our Dr. Suess collection (another author whose work has been reconsidered in recent years). I know that there was a cartoon series for several years and that I can go to any children's library and see a shelf of Babar books (written by de Brunhoff's son, Laurent). So my goal here is not to banish this book the way some of you want to rid the world of these books...or tried it with these so that your precious children don't look at their grandparents sideways.

It is to provide some context for why we must periodically assess the titles that we deem as classics. Once upon a time, Helen Bannerman's 1899 book, Little Black Sambo, was a beloved classic. I've seen some of the comments that defend the story, and I won't ridicule your fond memories. But the title doesn't concern you at all? What about the names of his parents, Black Mumbo and Black Jumbo? Does your opinion change after viewing this 1935 cartoon? Are you sure that you wouldn't rather read Sam and the Tigers (1996) by Julius Lester? Although it isn't a children's book, shall we discuss the evolution of Agatha Christie's 1939 classic And Then There Were None (since its original title was taken from a nursery rhyme/minstrel song)?

A few months ago, a school district outside of Seattle faced some backlash for moving Harper Lee's beloved classic To Kill a Mockingbird (TKAM) from a list of required reading to a list of suggested titles. The headlines claimed that the book was being banned, and initially I jumped in with both feet to decry such a blasphemous and knee-jerk decision. I got into a civil exchange with a parent who lives near the district, and he provided more context: the book was not being banned, it was being de-emphasized in the curriculum to give teachers more options. He pointed out that the issues being sensationalized in the media were valid critiques of the novel and that perhaps another story written from the perspective of the Black community in segregated 1950s Alabama would have more impact. We agreed that TKAM should still be taught, but that it should not be regarded as THE definitive antiracist text.

I was reminded of that exchange after reading Babar because it dawned on me how we become so committed to what we once knew such that we often refuse to see what we now know in clearer terms. I didn't even read TKAM in high school; it wasn't included in my high school Honors English curriculum (yes, that's a flex, but keep reading). I read that book eleven years later as an adult when it was chosen as the Big Read for the City of Chicago in 2001. I've seen the Academy Award-winning movie with Gregory Peck many times. And as an anniversary gift, I took the Hub to see the play on Broadway this past fall. Yet, if I am honest, I had never questioned why this book was so beloved until confronted by several revelations, particularly after seeing the play. 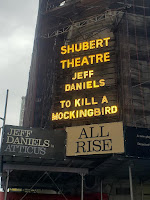 Why is this book, written from the perspective of a child, supposed to depict Southern racism in the 1950s more convincingly than other books written by BLACK authors who actually experienced it first-hand? In the play, it becomes clear that the most prominent voices we hear throughout are those of the observers instead of those who are the recipients of the town's racism. Remember when the alleged first draft of the novel was released and folks lost their minds because their beloved Atticus Finch was not all that heroic? In the play, that notion is hinted at in one confrontational exchange he has with Calpurnia, his maid, when she calls him out for his condescension. Ultimately, the original is a story told by an admiring daughter, and as a Daddy's girl myself, how else is she supposed to remember her father, except as a hero?

So when I saw Babar on my bookshelf, all of my childhood nostalgia hit before the reality. My Grandmother. My Aunt. Talking elephants that interact with people. Adventures in Paris, a night at the opera. A mystery to solve. The Babar that had been etched in my memory wasn't even from that original story, but it never occurred to me to look critically at the various subliminal references and nuances. It isn't even hidden--it is all right there as plain as the transformation that occurs while turning the page on Babar the wild elephant morphs into a civilized dandy once he dons a tailored shirt, a new suit, and shoes with spats worn on his hind legs. Instead of a zoo, the rich Old Lady's parlor is where he receives visitors who are regaled by the exploits of his past life in the wild. And so what if he doesn't have room in the car for his unclothed and unsophisticated aunts, they can follow behind on all fours...

Look, you can keep the original Little Black Sambo, those problematic Looney Tunes cartoons, and your racist pancake batter if it makes you feel better. But in a world where our children catch on a lot quicker than we did, you try explaining why you refuse to let go of outdated and offensive images. Or just start with the absurdity of moving a full-grown African elephant into one's home, even if he is house-broken and speaks French. I don't recall what book was substituted on our reading list in high school for TKAM, but if I were an English teacher today, I would concede the point that there are other titles, such as Ernest Gaines' brilliant A Lesson Before Dying, published in 1993 that could be taught in its place or alongside. If TKAM is truly a classic worthy of our adulation, it won't be forgotten, which is the entire point of initiatives like the Big Read.

Since I mentioned the Dr. Suess Library as having facilitated my introduction to the character of Babar, allow me to point out that times change, and not everything that was normal or acceptable remains that way. It was an internal review conducted by his estate that prompted those six titles to be dropped from publication. They aren't banned books in the traditional sense, so if you insist on buying them on eBay for your grandchildren, nobody is stopping you. But I am judging your insistence that your nostalgia is of greater importance than the offense it causes others, particularly when I know some of you actively protested a book about male co-parenting penguins (based on real events, unlike de Brunhoff's fictional talking elephants).

I am not chucking my Babar book. As I mentioned, it is 35+ years old and in good condition, so maybe one day I can sell it on eBay to help pay for a trip to Paris with my daughter. For the time being, it can go back on the shelf and stay there without upsetting the balance of life in our home. I might just go searching at my parents' house for that other book about Babar's lost crown. And if the Kid asks me to read it again, I won't object. Because I can balance that out by pairing it with other books, such as Dr. Suess' Horton Hears a Who (1954) or one of the fantastic Mo Willems' Elephant and Piggie books. There are also stories that mythologize elephants from Africa and India, as well as stories that teach children to respect wildlife in their natural habitat. And that is the point, there is a whole wide world of stories out there from which to choose, so no need for limits! 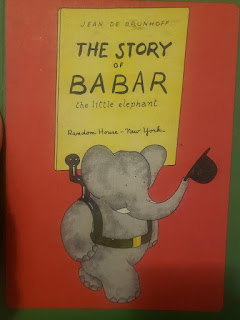 Posted by Ayanna Damali at 6:20 PM