Myth of the Black Subpar Woman 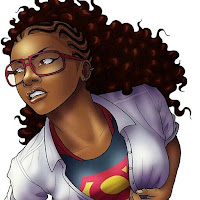 At the same time that Black women are finally ascending to positions of influence and authority in society, there are suddenly all of these hints and suggestions that we are incompetent. Correction: It is outright declared as the Gospel truth that we can't do the jobs that we have taken on, whether it is Madame Vice President Kamala Harris, Supreme Court nominee Ketanji Brown Jackson, New York Attorney General Letitia James, or the rest of us over-worked and under-paid Black women in the workplace. We really aren't anybody's superwomen...

This isn't a new insinuation. As soon as Black people began to insist on inclusion and equality, the counter-argument has been to raise the question of competence. White women who were offended that the 15th Amendment did not include them openly questioned the intellectual competency of the formerly enslaved to participate in political affairs. A century later when Black people were suing to gain access to public safety jobs that were filled primarily by white ethnic minorities, suddenly there were written entrance examinations to weed out incompetent applicants. The President of the United States nominates a Black woman to serve on the Supreme Court and folks are seriously demanding to see her standardize test scores from thirty years ago to attest to her competence.

Madame Vice President Kamala Harris has served just over one year on the job and people are calling her incompetent even though her only *real* job is to stay alive. Last I checked, she ain't dead. There is no constitutional job description for Vice President, except to advise and support the President. Her tweets are all grammatically correct. She laughs at his jokes. She dresses well, never wears too much makeup, and doesn't upstage the First Lady at formal events. She looks happy to be at work, which is more than can be said for many of us. She is Biden's actual work wife--a job that no one cared about, not even when Condi Rice was lying to the United Nations to justify unnecessary wars on behalf President Bush. But because Uncle Joe doesn't treat Kamala Harris like a wind-up doll and actually consults with her as an equal, that has folks triggered. Even Harris' safe and boring unremarkable fashion choices have managed to piss off some lady named Lynda, most recently for not wearing her hair in a dignified chignon. And as we all know, if she can't be bothered to use a hairpin, then how are we ever going to trust her to do anything serious?

Isn't that right Meghan McCain? We must be able to take the Vice President of the United States more seriously than this: 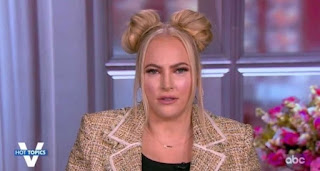 At least as seriously and as thoughtful as we took Sarah Palin, but that is such an old and tired joke. So perhaps someone like Rep. Lauren Boebert (R-CO), who tweeted how impressed she was by the Vice President's lack of knowledge about everything, and well that's not quite the insult she thought it would be. But it does track the general theme of the GOP talking points that Harris is ill-suited for her job, for no real reason except that they don't like her.

Supreme Court nominee Judge Ketanji Brown Jackson has all of the requisite qualifications and then some to serve on the high court, but folks are still twisting themselves into pretzels in order to justify their opposition. Senator Lindsay Graham (R-SC), who supported her just a year ago for the seat she currently occupies on the DC Circuit, criticized her Harvard credentials. Senator Ted Cruz (R-TX) is suspicious because she wouldn't drink his Communist Cuban coffee (because I'm sure she's seen The Princess Bride enough times to know better). We already know Sen. Mitch McConnell (R-KY) will try to slow walk the process the same way he prevented a hearing on Judge Merrick Garland back in 2016. And because there isn't an ounce of courage in the GOP Caucus, I am not expecting any kind of unity or solidarity from Sens. Lisa Murkowski (R-AK) or Susan Collins (R-ME) to urge for an expedient process.

Not that it matters, because plenty of Black women are ready to go to the mattresses if need be.

I must qualify that by saying plenty for I know full well that there is a distinct and vocal chorus of skinfolk haters who have and will speak out against any and every Black woman who deigns to deviate from their definitions of so-called acceptable Black womanhood. The hoteps denounce Black women with non-Black partners as bed wenches. The old guard patriarchs regard the social advancement of Black women in the workplace as a tool of white supremacy and feminism intended to destroy the Black family. The row of dowager deaconesses agrees as they cut their eyes and grit at any hint of non-conformity with passé norms of behavior. (Did you see her hair, is she wearing a slip?) Some of us do a better job of blocking progress than racism alone...

In the 80s and 90s, we considered it a victory to redefine Black Womanhood on our own terms, free from the stereotypes and caricatures of a docile Mammy, a tragic mulatto, and a shrill Sapphire. Black women recognized our power and began blazing trails into areas of American life that had been previously inaccessible. Spaces that were never built for us, off limits except for our grandmothers and aunties to clean after hours, we walked in with our loud, colorful selves and scared the hell out of everybody.

The downside of breaking through these glass ceilings is that the scars from the shards are permanent and disfiguring. Even after the glass is swept away, we're still walking on eggshells. We don't get to make mistakes. Less than two years after she won an Oscar for Best Actress, Halle Berry won a Razzie and her career has never recovered. Meanwhile, Tyler Perry's career is thriving. Wearing the wrong color nail polish put Meghan Markle on the bad side of the Royal protocol police. Sometimes it works out, like it did for Oprah and her afro in Baltimore; still, every now and then some Black news anchor will receive hate mail for wearing braids on air.

There are the never-ending petty criticisms. Jewelry that is considered too ethnic, accents that are too thick, bodies that are too curvy, attitudes that need to be adjusted. Voices that are too loud, especially when speaking out against injustice. Mothers that work too hard and neglect their children. Mothers that don't work, so they impart the wrong values. Young women that dress/dance too provocatively so why should anyone treat them with respect? Girls whose bodies begin puberty at 10, so they are expected by the age of 12 to know how to fight off grown men who should know better. Women with too much education and who make too much money to be desirable spouses.

Black women are reminded on a daily basis that we are too much for this world to handle with care, so we are abused and are expected to smile through the trauma.

This is particularly the case for Black woman in high-profile political offices. Black District Attorneys and Attorneys General are expected to be tough, not reform-minded. Yet, if they are tough on the powerful (i.e., AG Letitia James in New York or DA Fani Willis in Atlanta), then they are power hungry bitches. When Kim Foxx, Cook County State's Attorney in Illinois, called this out amid complaints that she had not been tough enough on actor Jussie Smollett, she was accused of playing the "race card," a most reliable deflection. Every Black woman who has or is serving as a big city mayor in recent years is to blame for every urban problem that she hasn't managed to clean up six months or less into her tenure. My Mayor, Muriel Bowser, was ridiculed for attending the ribbon cutting of a Starbuck's in an economically underserved community. The Mayor of New Orleans, LaToya Cantrell, was criticized for not wearing a mask in photos taken of her at a Mardi Gras dinner (by several people who weren't wearing masks themselves). Y'all even went after former Atlanta Mayor Keisha Lance Bottoms over a picture of her mac 'n cheese on Instagram. 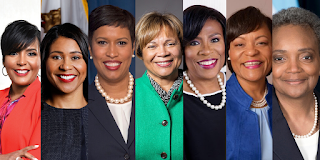 We've erected monuments to Shirley Chisholm in honor of her historic run for President in 1972, but she didn't live to see any of this adulation, nor was the praise this effusive until after she died. Perhaps this delayed veneration is understandable given that Chisholm was 50 years ahead of her time. Yet, it doesn't square with the way some of y'all talk shit about Madame Vice President while praising Michelle Obama...makes me wonder how much progress has really been made. How would history have been different if Michelle had the audacity to pursue a political career instead of Barack? It would have upended the narrative of the perfect nuclear Black family if she hadn't stood by her man, so we don't talk about the career she gave up in order to support his run for POTUS. Lest we conveniently forget, she was his mentor. She was the breadwinner. But let's save that conversation for later.

When I started this piece, it was before the confirmation hearings had begun for Judge Ketanji Brown Jackson (so stay tuned for my take on that fiasco). I began writing in response to the criticisms lobbed at the Vice President during her trip to Poland and the constant insinuations of her incompetence by her political opponents. It was incredible to me that someone as dimwitted as Lauren Boebert felt entitled to belittle another woman based on alleged deficits of her intellect, because in a contest of anything other than beer pong...

I know, when they go low, blah blah blah. But it is hard to suppress the urge to clapback. It takes a special kind of fortitude and resolve to sit in calmness and with grace while someone is berating your very existence. It is fucking exhausting to watch, let alone experience on a regular basis. How are we incompetent, unqualified, not taken seriously, disrespected, maligned, discriminated against, looked down upon, mistreated, diminished, disregarded, overlooked, underpaid, and YOU are still breathing?

Posted by Ayanna Damali at 7:45 AM