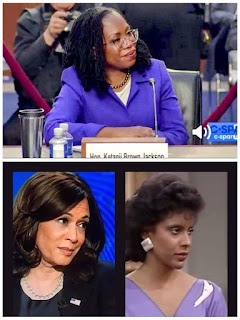 The previous piece began as a rant against the absurdity that Madame Vice President was incompetent. While writing it, I learned that the Supreme Court confirmation hearings for Ketanji Brown Jackson were scheduled to begin at the beginning of this week. So where I could, I took breaks to try to finish that piece while also tuning into the hearings. If I can take a moment to brag, this picture I posted to the Facebook page on Tuesday morning, which my friend Ol' Hobbs reposted, went viral like an old school Fabregé Organic shampoo commercial...

Now at the conclusion of all that, it is fair to declare that everyone saw what they saw, as well as what they wanted to see. Those Senators who went into these proceedings with a mind to oppose her nomination magnified and exaggerated whatever small controversies they could to justify that choice. Other Senators who have yet to tip their hand will let us know in due course. And the Senators who understood the assignment, rose to the occasion.

A few weeks ago before Judge Jackson was announced as the nominee, I already knew this would be another partisan freakshow with plenty of clowns and stupid human tricks. I have been watching Supreme Court confirmation hearings since Robert Bork, and would not be surprised if somebody ended up butt naked and dancing on the tables if that's what it would take to get them the media attention they crave. And more than a few folks delivered this time. No need to offer any recaps of their antics because even if you weren't watching, you already know who did what and why.

Yesterday when I was just about ready to publish the previous piece, I read that Senate Majority Leader McConnell had issued a statement in opposition to Judge Jackson's nomination. Not unexpected, but my curiosity led me to listen in to the portions of his floor speech where he offered his reasons. After a grueling four days, in which everyone had to be both physically and emotionally drained, he came out and made his pronouncement as if this was the elimination round of American Idol. In what can only be described as uncharacteristic of the Busy Black Woman that you all know and love, I was momentarily unable to string together the best combination of adjectives to express just how angry his statement made me feel, so here is one: dashed.

Earlier in the day, Wade Henderson from the Leadership Conference on Civil Rights, whom I've known and worked with for years, testified on the panel and offered remarks in support of Judge Jackson's confirmation. His support was also not unexpected, and he offered this keen observation that perfectly and forever frames my frustration: we can be prepared, we can be ready, we can be qualified, but someone will always find a reason to claim none of that is good enough. So then, what is good enough?

Of course, that is the rhetorical question for a lifetime.

I am usually not given to despair. But in a moment of vulnerability, I began writing my thoughts in what was intended to be a strategy email to my Social Justice Ministry team:

This has been an emotional week...for reasons that I shared with some of you who tune in to the 7am Prayer Call, and for a few other reasons that have caught me off guard. I knew a few weeks ago that this would be a difficult process, but I did not anticipate having such a personal reaction to the disrespect I witnessed.

Judge Jackson is supremely qualified. Yet, Senate Majority Leader Mitch McConnell released a statement that he would not support her nomination based on her "performance" in front of the committee. Unbelievable.

Judge Jackson never lost her temper. She didn't respond to the taunts with a raised voice or by losing her composure. Meanwhile, I watched a Senator who once chaired this Committee and who voted for her preciously have a complete meltdown and storm out of the hearing room twice because of his disagreements with the Chairman. This same Senator insisted at the outset of these hearings that Judge Jackson would be treated fairly and that no one would be able to accuse his side of racism.

Yet, because there were a handful of cases where a couple of Senators disagreed with the sentence that she imposed--after accepting GUILTY pleas or having found the defendants GUILTY, these Senators went to great lengths to paint the Judge as too lenient. For her work as a public defense attorney, Judge Jackson was accused of insensitivity to the rights of victims or for having sympathy for accused terrorists. One Senator demanded an apology from her for having imposed a sentence below the prosecutor's recommendation, as if Judge Jackson had herself committed the crime.

I watched Judge Jackson become the living proxy for the ongoing culture wars that certain Senators believe is a winning political strategy for them to regain political power. How else does it make sense to expect for a potential Justice to weigh in on a rhetorical proposal to expand the Court? Why accuse someone serving on the board of a local private school of promoting critical race theory when she is not an educator or curriculum writer? Why insist that her choice not to answer a question that might potentially be brought before the Court is evasive when similar precedent had been established by other previous nominees?
Thank goodness for Sen. Cory Booker (D-NJ), with righteous assists from Sens. Mazie Hirono (D-HI), Alex Padilla (D-CA), and Jon Ossoff (D-GA). Thank goodness Sen. Dianne Feinstein (D-CA) as well as former Sen. Carol Mosely Braun (D-IL) who, appalled by what they saw take place when another Black woman had been verbally abused and insulted by this same Committee 30 years ago, had the audacity to run for the Senate in order to change the optics and history. Thank goodness that Sen. Amy Klobuchar (D-MN) was present as Judge Jackson's true peer and ally, a woman who has also had to fight back sexism to take her rightful seat in that Committee room.
Thank goodness for the Brown and Jackson families. As Sen. Booker said, we look at Mr. and Mrs. Brown and see the pride. We look at Dr. Patrick Jackson and see a man who unapologetically loves his wife lauds her every accomplishment. We look at their beautiful daughters and see young women who will be inspired to aim high.

That was before the fatigue and mental exhaustion set in. It wasn't until this morning when I went back to hit send that I realized that I hadn't gotten to the action items, let alone the point after eight extemporaneous paragraphs. Clearly, I needed to vent...

Before the point gets lost again, I want to return to the query Wade Henderson made, in essence, how much more does it require? How can any of us expect to be treated fairly in this so-called colorblind system when we see daily examples of the hypocrisy that proves there are double and triple standards when it comes to our advancement? It was ironic to note that Keisha Russell, the lone Black woman called to testify as an opposition witness merely had to affirm the accusations that Judge Jackson is a proponent of critical race theory. No one probed Russell for deeper analysis, no one insisted that she provide any concrete specifics from Judge Jackson's body of opinions. Because they heard what they wanted to hear, Russell's five minutes of hand-me-down talking points was more convincing than two days of testimony and the intense questioning of the Judge!

That is beyond infuriating. It reminded me of a question I asked years ago when I was in college. I had just read Incidents in the Life of a Slave Girl (1861) for the first of three times that book would surface in my studies. Years earlier, I had read Uncle Tom's Cabin (1852) and knew that Abraham Lincoln and the abolitionists of the day credited that fictionalized work as having been a catalyst for the Civil War. I had also read Frederick Douglass' Narrative (1845), so in my understanding of the historical timeline, a few things didn't make sense. How was I just reading Incidents for the first time? If there were other contemporaneous narratives that offered first-hand accounts of the cruelty and inhumanity of enslavement, how were they less persuasive than Stowe's novel? How did Stowe's book get credited with starting the war, and then why did it go on to inspire minstrel shows and create this enduring offensive imagery that we can never quite transcend or escape?

I did not get the answer I wanted. But I understand, having lived long enough and seen this play multiple times. Our admittance into the echelons of power isn't up to us, no matter how impeccable our credentials or much we accomplish. If Mitch McConnell and Co. have pre-determined that Ketanji Brown Jackson isn't qualified for a lifetime appointment to the Supreme Court, but Amy Coney Barrett is, then they will act accordingly. I can underline, highlight, CAPITALIZE, bold, italicize, and spell out the h-y-p-o-c-r-i-s-y, but it won't make any difference. Therefore, the "performance" that didn't win McConnell over wasn't how calmly she sat there and took the abuse from his minions. What he wanted was for her to concede, which she refused to do. You can never expect the Man to bestow his blessing or favor without giving him what he wants. (And I've got a whole other theory about that, so stay tuned.)

What happens next is the actual battle to vote on this confirmation without any delays or procedural shenanigans. When the score is this close, one team will try to run down the clock. I am not that savvy with sporting metaphors, but I know that we're not even at the halftime. Somebody has a few tricks to pull out of his a$$ because there is an election coming and some folks are counting on this nomination to help them shift the balance of power to their advantage. We need to play chess and think several moves ahead. No premature celebrations (remember the Falcons overtime loss to the Patriots in 2017). We're not even close.

That does not diminish Judge Jackson or the possibility of the role she is poised to take. On the prayer call that I referenced, I quoted from Galatians 6:9, "Let us not be weary in well doing: for in due season we shall reap, if we faint not." I recall that another recent nominee also cited a related passage of scripture from Hosea 8:7, " For they have sown the wind, and shall reap the whirlwind," as a warning. Quite the paradox, using the same metaphor to communicate both foreboding and hope. (Somebody will get that--how two people can read the same verse, or statute, or case history and have different interpretations of its meaning). In the meantime, I choose hope. 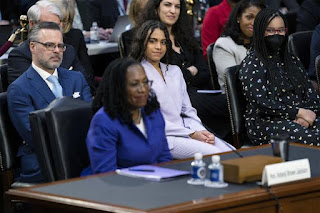 Posted by Ayanna Damali at 7:59 PM