There are times when I really want to seem supportive of Melania Antoinette, like now after she conveniently decided to embark on a goodwill trip to Africa to put an entire ocean between herself and her husband. I want to believe that Mrs. T is there to bring attention to some issue of concern that the rest of us overlooked in all of the hubbub over the Kavanaugh confirmation. But no. She went there to prove that she could be a VOGUE cover model if only Anna Wintour would give her a chance. 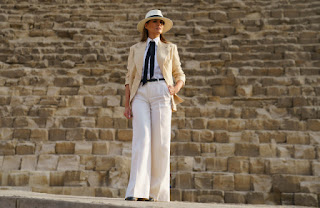 This picture is stunning and editorial. And it proves that even when she is trying to be legitimate and substantive, she can't help but troll us in the process. Melania Antoinette is oven-baked fried chicken wing tips covered in corn flakes. Fake and useless.

I am not dismissing her because she was once a model. Every woman who comes to that job was once something before she donned the title of FLOTUS. And each woman made deliberate choices about how they would use the role of First Lady to advance some important cause for the good of America. Nancy Reagan urged us to say no to drugs. Barbara Bush encouraged community service. Hillary Clinton was laying the groundwork for her own run for President one day. Laura Bush promoted literacy and Michelle Obama tried to get us to exercise and eat more vegetables. All of those were worthy causes.

Melania has told us to Be Best. And if you remember from the 2016 Convention, Melania doesn't believe in reinventing the wheel, so this effort is a bit of Nancy Reagan (opioids) mixed in with some Michelle Obama (wellness), topped off with her own special anti-bullying campaign sauce (the recipe for which she probably stole from Teresa Heinz-Kerry).

Be Best. Like the time she went to visit the children who had been separated from their parents along the Mexican-American border. Her office claimed that she went to thank law enforcement and to learn how the Administration could facilitate family reunification efforts. Yeah, we're still waiting for something tangible to come of that other than bad publicity about the jacket she wore. And we're suspicious that many of the children will probably be adopted by American families since their parents were deported without a trace.

Be Best. Like this trip to Africa where she has been rightly critiqued for her fashion choices. Some of the complaints are nit-picky, because there is nothing wrong with her desire to channel the Man in the Yellow Hat while on safari in Kenya (presumably, still looking for Barack Obama's birth certificate). But she is the American First Lady, and honing in on the outfits she chooses to wear is someone's thankless job. So it is disingenuous to complain that people should pay closer attention to what she's doing than what she's wearing when she is so obvious about trying to get us to pay attention to what she's wearing.

Be Best. Like actually stand up to your bully husband when he mocks people. Don't send out wink-wink messages in defiance, as if LeBron James cares whether you want to come visit his school. Don't tell us that your husband is his own man, then walk two paces behind him to whatever formal events he allows you to attend. Don't try to convince us that we need to be mindful of what we say online when your husband regularly insults his opponents on Twitter. Don't stay silent when your husband takes aim at women whom he deems are meek and vulnerable like Christine Blasey Ford and Dianne Feinstein. We don't care if you wear a pantsuit to the State of the Union, wear a pussy bow blouse instead of a pussy hat, or if you have a drawer full of safety pins. How are you helping?

I've got a new and improved slogan for you Miss Mellie--Do Better.
Posted by Ayanna Damali at 1:26 AM