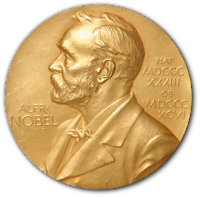 I awaited the Nobel Peace Prize announcements with a bit of anxiety. I was worried that if the prize had been awarded to the Koreans for their recent efforts at reunification, it would have by default, been the same as giving an honorable mention to our President. And the nightmare would have been his incessant bitching, whining and complaining followed up with a Swedish travel ban, the renaming of Swedish Fish candies, a mass dumping Swiss Miss cocoa into the Rio Grande, and other assorted nonsense (even though the Peace Prize is awarded in Norway, and Swiss = Switzerland ≠ Sweden). This is not to say that the possible end of the Korean War isn't a good thing; it is an acknowledgment that no one needs to give that man any reason to gloat.

I was struck by the choice of this year's winners--Dr. Denis Mukwege and Nadia Murad, two activists who work against sexual violence in wartime. The fact that they won is not really a surprise since the Nobel Committee tends to be responsive to the times when selecting Peace Prize recipients and generally the winners are chosen to highlight a specific global issue. Nelson Mandela and F. Willem DeClerk won the year before Mandela was elected the first black President of South Africa, and the prize was awarded to the International Committee to Ban Landmines the year Princess Diana died. I'm guessing that they gave one to Jimmy Carter in response to W's warmongering, and Barack Obama won his because he was having a really great year as America's first black President. Last year's award to the International Campaign to Abolish Nuclear Weapons was definitely a statement against the President's tough talk of rebuilding our nuclear arsenal.

The surprise this year is that sexual violence as a weapon of war is nothing new, so the choice to acknowledge it now seems fortuitous. No one has been talking about it as an issue of immediate crisis, but perhaps that reflects my bias as an American who tends to see the world through our flag-framed glasses. We aren't talking about it as an issue, but we are having a national reckoning with sexism as a tool of oppression in our society.

Of course, the Nobel Committee didn't plan to raise this issue in response to what is happening in America...but while we suddenly acknowledge rape as a brutal consequence for girls and women who live in zones of conflict, perhaps we should reexamine the precarious status of women everywhere. Women are always vulnerable to sexual violence. So are children. So are men. And sexual violence has always been a weapon of conquest.

Sexual violence is recorded in Genesis, as early as the story of Abram and Sarai in Egypt. Most people wouldn't interpret the story of Sarai being taken into Pharoah's house as a rape, but think about it (Genesis 12: 10-20). We interpret the destruction of Sodom and Gomorrah as a morality lesson against homosexuality (Genesis 19: 5) without acknowledging that Lot offered his virgin daughters to an angry mob (Genesis 19: 8). In Greek mythology, Zeus was a serial rapist and the abduction (rape) of his daughter Helen caused the Trojan War. In Roman mythology, there is the infamous rape of the Sabine women (which is exactly what it was). The late night creeping down to the slave quarters. Comfort women. Bed wenches. White slavery. Human trafficking.

To act as if sexual violence is worse in the Congo or as committed by the Islamic State is politically expedient for highlighting the breakdown of social structures during war. We've known about the exploitation of women in the Congo since at least the 2000s (it even inspired a Pulitzer Prize-winning play Ruined in 2008). We've known that ISIS has kidnapped women as sex slaves since its incarnation in Africa, Boko Haram, kidnapped more than 200 girls from a Nigerian school in 2014 and again this year. We've known about the destabilizing impact of sexual violence in societies where women are systematically unequal to men.

If we are outraged by stories of young women being abused by militants, then why are we not as inclined to believe similar atrocities being committed at house parties, in fraternity houses, in locker rooms, and elsewhere? How are we not seeing this parallel? In our current "culture war", the concern for men's reputations is being weighed against the credibility of the victims who are coming forward, sometimes years after the fact. We're choosing to condemn an obvious wrong while covering our eyes to something more subtle.

Sometimes we need to start with the low hanging fruit. That statement doesn't diminish the significant work of the two honorees, because despite all of our awareness, we have yet to prevent sexual violence wielded as a weapon of terror or oppression. Women are just as vulnerable in the remote parts of the world as in the so-called civilized places. However, the light of the sun eventually shines on all of us.
Posted by Ayanna Damali at 12:25 AM