It must suck to be Princess Eugenie of York right now because the weekend of her big wedding, the top news stories (at least on this side of the pond) have been about EVERYBODY but her. So I plan to remedy that by allowing her to take the lead in this piece. She was an absolutely lovely bride. Best wishes to her for a wonderful life with her groom, Jack Brooksbank. 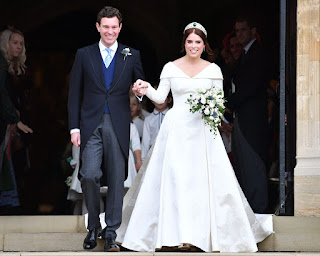 But, Meghan the American Princess is preggers and that pretty much means there is nothing another royal can do between now and next Spring (except die) that will ever be more important.

I had been waiting all day for someone to declare that the H&M breached protocol by sharing their big news with the family at the wedding. Of course there is no way this would have stayed a secret for long since folks have been all up in Meghan's uterus since June, but there had to be some other way to camouflage it better than a bulky overcoat that practically screamed "I've got something in here!" No matter though, because it is pretty clear that the other royals seem resigned to cede the spotlight to the Duke and Duchess of Sussex.

And until our fabulous ginger brown royal baby is born, no one else matters. Not Pippa Middleton's newborn kid. Not the kid royal cousin Zara Tindell had weeks after Harry and Meghan's nuptials. Not even Prince Louis, born weeks beforehand. We don't care about Brexit. We don't care about that hot air balloon of the American President as a crying baby. We don't care that his wife finally spoke up for herself, but had nothing to say.

I recall how a certain Sarah Ferguson stole the thunder away from the Princess of Wales some thirty years ago and that for a while, it went back and forth between the two women until Diana's tragic death. According to legend, it was Diana who brought Fergie into the royal fold, but then she got jealous over the press attention paid to the shiny new royal. The two became rivals and I'm guessing that royal rivalries are a lot like commoner family drama, except there are tiaras snatched (instead of wigs) and tell-all books to be sold. Or put another way, it is like having two versions of potato salad at the family barbecue sitting side by side, and you have to eat a serving of both or all hell will break loose.

In this case, Meghan is the shiny new royal who also happens to be American and also black, so our fascination with her should be understandable. These are dark times in America, so anywhere in the world where a black woman's pregnancy announcement is a big effing deal is a ray of hope. I've got friends who have publicly prayed for this child to have curly red hair and freckles. I haven't even checked in with my Dad who I'm guessing is excited as if this baby is his fourth grandchild (because he and Harry share a birthday).

But we are very happy for you Princess Eugenie as well because it is a good thing whenever young people get married. And even though Meghan and Harry are total cheeks for allowing their baby news to get more coverage than your wedding that only aired over here as a reality TV special on TLC, we know that in the royal order of things, you have the advantage of being an actual princess. And yes, while Meghan's kid will push you down a notch in the royal lineup to the throne, it isn't like any of your children will ever sit on the throne (except to play on it).

And here, I want to give you this as a wedding present, for you to use at some point in the future. I don't suggest using it against Meghan, but there are plenty of other lesser royals that you can outshine with the right timing.