Red Beans and Rice Monday: Black State of the Union

I was in the house all day Saturday while a lot of my friends were out celebrating that great HBCU revival known as Homecoming. So I was a little salty. And since I was not at Homecoming (and could not spend the entire day liking pictures of my friends enjoying Homecoming), I decided it was my civic duty to devote a block of time to sorting laundry and watching Candace Owens deliver her  Black State of the Union address.

What is that and who is she? Glad you asked.

To offer some context, I have written about Ms. Owens previously back when she issued a challenge to debate Alexandria Ocasio-Cortez, which I found to be an insulting publicity stunt orchestrated to give Owens some political street cred. She is one of several young GOP pundits who came of age in the Obama era. I am unsure of her exact political evolution, except that when it happened she released a YouTube video that explained her 'coming out' to her parents. And somehow, she has a job as the communications director for Turning Point USA, which is a glorified post-graduate political fellowship of sorts for the College Republican crowd. Thus, it was no surprise to see her cheek to cheek in a video with the First Named Son of the POTUS.

Nor was it at all shocking that she believed she could produce a watershed moment for Black America at 4:00pm on a Saturday afternoon during the weekend of several major HBCU Homecomings. Not at all delusional.

To her supporters who might be reading this, you can dismiss my critiques as shade, or you can ask the same questions I have posed here. Let's begin with why her big speech did not begin on time. And then why it was not streaming on Twitter as she had advertised. And then why she had to tweet out a link to her Periscope channel with footage that looked like my Kid was streaming it live by accident. And why the sound quality was also bad, so I had to use my imagination to fill in all the gaps that were audibly indecipherable. And why for at least ten minutes, she ceded the floor to some guy whom she felt would augment whatever case she intended to make, but again because of the poor sound and video quality, it looked a lot like Kanye West snatching the microphone from Taylor Swift...

Here is the gist: she is a young black conservative who is offering the same rhetoric that I have heard for years. In fact, I attended one of those Young Republican dinners as a college student, so I can assure you that she gave the same general speech beginning with the plantation imagery to the denouncement of Planned Parenthood to the welfare state being the reason why so many black children are born to single mothers. All of that is the fault of black voter loyalty to one political party.

I could go into the contrasting arguments that provide the foundation of the conservative appeal to black voters and while none of that has any impact on my political leanings, I recognize that there are some people who find that end of the ideological spectrum compelling. And that's cool. I have been friends with black conservatives and thought they were decent people. But we disagreed and in this current political climate, I struggle to understand their alignment with a man for whom values are currency, not policy. So I regard Candace Owens and her conference room full of followers with the same skepticism that people of a certain age look upon optional technology. Google glasses sound like a interesting concept, but no one needs them. I'm sure that there are black people who need a reason to justify their decision to join the GOP, but the rest of us really don't care.

I am clear that Owens and Company actually believe in the conservative ideology of free markets and personal responsibility--what the GOP used to espouse. However, in my experience, what these folks want is a way to stand out in a crowded field where simply being different is enough to advance. These same people decry affirmative action as reverse racism against their white friends without recognizing that they contribute to that same alleged preference for black, brown and/or female voices to serve as mouthpieces for white mediocrity.

And quite honestly, I was offended that Owens had to stage her announcement without the bells and whistles that should have accompanied such an important cause. She was hosting this event, so why couldn't she even get a FOX News production intern to ensure that her big speech got the attention she clearly felt it deserved? Let me point out that the President's address to the summit got C-Span coverage, while she got to upload a fuzzy cell phone video onto Periscope (I did see some better quality footage on Breitbart, but I'm not linking to that). Thus, consistent with what I have observed over the years, the GOP isn't really interested in cultivating black and brown voters except on the margins.

It is legitimate to point out that for all of its lip service to diversity, the Democratic Party has a lot of baggage with respect to supporting black and brown candidates who vie for public office without coming up through the traditional party structure. It is an ideological difference of opinion that government safety net programs have enabled poverty and contributed to the breakdown of the traditional nuclear family. The founder of Planned Parenthood might have been a racist eugenicist. And once upon a time, because of the GOP's past support for civil rights, black voters like my grandparents could be swayed to vote for Republican candidates.

But you won't win folks over to your side if your opening salvo is the suggestion that people are mentally enslaved or somehow incapable of the critical thinking ability to make pragmatic political choices. Or if you ignore the ideological and demographic shifts that made one party more attractive to specific groups of voters. Furthermore, if your ideas are so much better, then they would prevail without having to resort to tactics that suppress the vote or attempt to undermine the process. Because if the issue really is about the freedom to choose, then it should be your business to ensure that everyone has that right.

Finally, just take this advice with whatever you choose (grain of salt/shot of bourbon), but black people are wary of folks who have been designated as black leaders by outsiders. We've got to believe in you on our terms, so unless you and Kanye can do better than market a new clothing line with a unoriginal hashtag and a familiar corporate logo, you aren't leading a movement, just another parade. 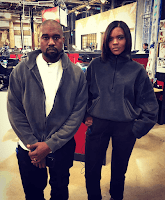 Posted by Ayanna Damali at 6:27 PM