Note: I had begun to write this piece this weekend before our boorish POTUS mocked Christine Blasey Ford at a campaign rally. While it doesn't alter my opinion of the sympathy she received, it does disgust me to acknowledge the partisan callousness and insensitivity of the sycophants who support that man. God help us.

Okay America, I waited a respectable amount of time to say this: I don't understand why Christine Blasey Ford was so much more believable as a witness than Anita Hill. I know that no one has come out and said that (well, I don't know that for sure because I don't watch FOX), but I find it incredible how everyone claims to have been moved to tears. Even the President praised her testimony as compelling and called her a "very fine woman". Now I don't know if he was complimenting her courage or if he was judging her looks, but coming from him that is...wow.

In contrast, Anita Hill was not universally praised or lauded for her courage. In fact, I recall that she was asked whether she was a jilted lover. I recall that she was practically accused of perjury. I recall that it was suspected that she had been paid to bring that black man down. I recall that when she faced that same committee, there was no bending over backwards to keep her from dissolving into a puddle of tears. Not that anyone would have cared if she had though.

Public opinion about Hill changed somewhat after the fact and she is recognized as having helped to usher in the Year of the Woman in 1992. Now we can acknowledge her grace and fortitude, but that didn't happen overnight. It only took 27 years to identify that it was she who helped us to develop the language and the protocol for confronting sexism in the workplace.

This isn't a swipe at Christine Blasey Ford, this is a swipe at America for always coming to the rescue of white women. Let a white woman cry, and everybody is straining to lend her a hanky. But let a black woman get angry, and a bunch of whiny men want to boycott her matches. Yeah, I said it.

That is exactly why Permit Patty and the Airbnb Lady and the Starbuck's manager and the rest of them can call the police for minor offenses because they KNOW that even if they are wrong, their tears can wash away their sins. That's why Sarah Huckabee Sanders can get away with lying every damn day. That's why Megyn "Jesus is white, and Santa too" Kelly still has a talk show. That's why Birth of a Nation is still regarded as one of the greatest films ever made...

And that's why so many women of color don't trust white women. We can endure the same hardships, encounter the same glass ceiling, face the same trials and tribulations of abuse, but black and brown women still had to declare #MeToo unnoticed for ten years. Face it, you can sell more magazines with Alyssa Milano on the cover than with Tarana Burke. Our children become adults at 12 and can be exploited as sex workers, but let an 18 year old white woman go missing...

It is the darnedest thing, but we accept that is how the world works. That's why this doesn't surprise us in the least: 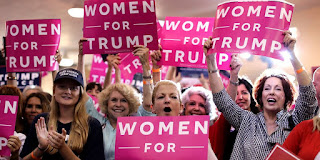 And it won't surprise us, if after all of this hype about a blue wave of change, that come November, right before it gets cold enough to put on a pussy hat, Rebecca is going to look at her son who is still living in her basement and wonder why he isn't doing as well in life as Khalil and Jose, the kids who grew up playing baseball with her son. How she feels about their divergent trajectories will determine how she votes.

Christine Blasey Ford is a sympathetic victim. Anita Hill is just another martyr.
Posted by Ayanna Damali at 1:20 PM