I was recently reading some analysis about the two political parties regarding 'optics'--how one party's clamor to showcase diversity is the very turn-off for some members of the other party who would prefer not to engage in identity politics. You know, the All Lives Matter folks who get triggered at the mention of the word black in any context other than fancy dresses and eyeliner.

Briefly, I thought about their discomfort as I rejoiced during Sen. Kamala Harris' acceptance speech. As you might already know from the name of this blog, I don't have any issues with being Black, living while Black, consorting and living amongst my fellow Blacks, nor do I worry myself about how others perceive my unapologetic Blackness. I don't exactly get why that is so offensive or abhorrent, but I also don't get a lot of things like treating dogs like children or Taylor Swift fans older than 30. Life is like that sometimes.

But now that we're all set to make history (regardless of the election outcome), I guess it is time for us to have the talk. The Dear Colorblind White People talk...

Let's start with the low-hanging fruit, which is everybody's favorite MLK quote from the 1963 March on Washington, which was delivered 57 years ago this week. We know how much y'all LOVE that speech and that line, and how it serves as a guiding principle for people who gloat of their lack of prejudice. I know, you're just out here living King's dream, judging people on the content of their character and not by the color of their skin.

And I'm glad that you took those words to heart, but perhaps you took it too literally. There are times when you can and should make decisions on the basis of skin color. Let's start with your definitions of nude and flesh-tone, or the notion that there are certain colors that are universally flattering. Having emojis available in a range of skin colors is a good thing. And as cute as it seems to suggest that everyone should be treated the same, as if we were all purple...no. Because nobody is purple.

The fallacy of colorblindness is its default to whiteness. You can afford not to see color if you exist in a dominant space where decisions have always been made for your benefit. You can choose colorblindness as a justification for all of your implicit biases. You don't have to notice that every person who gets hired looks like you or that they went to the same schools or that they grew up in a certain part of town. You don't have to consider anyone else's experiences if you can safely assume that yours are typical. And even when you make space for others, you can choose how much or how little counts. This is why we call that white privilege, in case you were wondering.

So what I fully expect to see next week is akin to spending the day binge-watching the early days of TV Land, back when it was non-stop Father Knows Best, Andy Griffith, Leave It To Beaver, Bewitched, Ozzie and Harriet, and Wyatt Earp, with Archie Bunker as the prime time highlight. Mind you, there is nothing wrong with these old shows, but when it comes to inclusion or post-60s progressiveness, the only shows y'all remember are Julia and That Girl.

The homogeneity of that worldview is one that insists on American exceptionalism at the expense of the truth. It excuses hypocrisy and operates in the universe of alternative facts. It celebrates the gallantry of a Lost Cause and justifies certain forms of exploitation as opportunities. It refuses to admit wrong-doing, choosing not to dwell on the negative. It insists on assimilation and diluting one's culture for palatability. It chafes at being inconvenienced, even for the common good.

It says that to be a real American, your dream is to live in a home that resembles this: 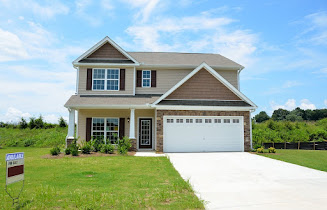 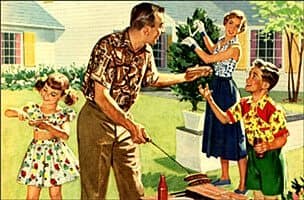 And a religion that definitely preaches this: 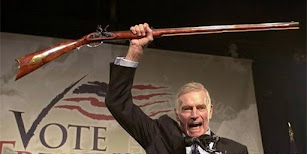 There is room for some deviations from these images. You can live on a farm.

Of course this is an exaggeration. But I dare you to watch that other convention with any expectation of seeing the kind of old school Benetton diversity on display. It's going to be all Ralph Lauren, Yacht Club, Wrangler jeans, and cowboy boots. And that's okay, but please do us a favor and not insist that your America has evolved much from this: 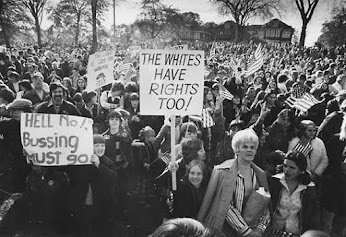 For this too is America, just a few years removed from the black and white idyllic past you miss. And while you will twist and bend yourselves in all kinds of shapes to pretend that is no longer the reality, the fact is, some of you were proud to parade through the streets demanding hair cuts. But then had the audacity to take offense against folks demanding not to be killed in police custody.

I fully expect that the RNC convention this week will go out of its way not to showcase diversity, just to make the opposite point. Who needs a cup full of brown sugar when a nice sprinkle will do? And what's wrong with refined sugar anyway? Why do we need agave, cane sugar, and all that other stuff if sugar is sugar? People are people. Conservative people just have different ideas.

By the way, conservative might not be a racial category, a foreign language spoken by the help, violent religious fanaticism practiced by people in the desert...but it is a label. It is an identifier, so the sticking point isn't identity politics inasmuch as it is dealing with the adjectives and hyphens that are more tolerable than others. Blue Lives Matter even though nobody is born blue. Build the wall to keep out immigrants from shit-hole countries although no one else is dying to get here, especially not now. Evangelical Christianity is under persecution when we say Happy Holidays. Masks infringe on your liberty but the Confederate flag is just cloth... 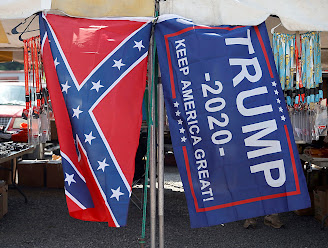 But please, no pandering or virtue signaling.
Posted by Ayanna Damali at 11:01 AM