The Whites of Their Lies

Ordinarily I would not go out of my way to fact-check the numerous falsehoods and outright lies told by those whose political opinions differ from mine, but whew chile, on the first day of the Republican National Convention, I heard some whoppers. It will only get worse, as there are three more nights and so as a public service, I will offer this Busy Black Woman's opinion of what happened and what I suspect will be the continuing theme of this convention in a meme:

But allow me to rephrase my opening sentence, because not everything that is said by those with views on other political spectrum are lies. We disagree. We see problems and solutions from different perspectives. Their blues aren't like mine, et cetera, et cetera...

For me, the tone was set earlier in the day with that State Roll Call. I was unbothered by the fact that there were a handful of people of color chosen to announce their delegate commitments, but I took note of it as a nod to my prediction that there would be no overt efforts made to demonstrate diversity where there was none. And I would have ignored the entire process as background noise had it not been for the fact that the Arkansas representative invoked the name of Daisy Bates as a honored citizen of his state.

Suddenly, my ears perked up and I spent the next several hours live-tweeting the roll call for other tall tales and American fables. It just struck me as incredibly discongruous that the mostly white assortment of convention delegates would choose to highlight women and nonwhite citizens from their state, most of whom would not have been lauded as heroes during their lifetimes. Based on what we know of history, I am pretty clear that most of them would NOT have been supporters of this Regime either. For example, the DC delegate was proud to identify Frederick Douglass as a Republican, which certainly is the party to which he belonged back in 1880. But to suggest that he would have maintained that affiliation in 2020 is peak 2020 insanity.

The Roll Call got suspended twice to yield time to both Mike Pence and the DEPOTUS to address the delegates. I should have listened, but I had to clean the crap from my Kid's underwear.

When I tuned into the prime-time proceedings, it was with an eye towards hearing the remarks from Senator Tim Scott (SC) because I was genuinely curious how he would be able to stand up for this President and the chaos that has rained down on America and the world like acid rain. Since Scott was the keynoter for the evening, I choose to sit through the preliminary speeches just to get a taste of what would unfold throughout the week. And I won't bore you with details because it was all the same our-side-is-better-than-them that always goes on at these events. There were some awkward taped segments, but mostly a lot of stylized production which shows they took notes from last week. For more expert analysis and fact-checking, you can tune to your favorite cable news network.

However, I do feel the need to weigh in on some of the speeches because it isn't enough to suggest that Vernon Jones was not just exaggerating about his candidate's support for HBCUs. Or that Herschel Walker's personal relationship with the DESPOTUS doesn't mean he isn't a racist. Or how Nikki Haley clearly doesn't even believe her own spin on American racism if she can't use her first name, Nimrata. Or how Kim Klacik is hardly credible as a candidate to represent a city where she doesn't reside. Their personal affection for the White House occupant is their business, but as usual, people of color are trotted out to disprove the truth of what our eyes see and ears hear when he speaks. The disconnect here is to assume that because they found personal favor with the emperor, the rest of us are not suffering under the yoke of his oppression.

And for all of the warm fuzzies those speakers offered, there was the appearance of the McCloskeys, the Missouri couple who brandished guns from the lawn of their Versailles-style palace while BLM protestors marched through their neighborhood. Mind you, the marchers went past their house, not through it and not a rosebush was trampled, but because gun-toting white folks feared a mob of Black kids armed with cell phone cameras, they are victims. They got rewarded with a prime-time audience to validate their entitled whines about good suburban homes being devalued by an invasion of poor peasants. 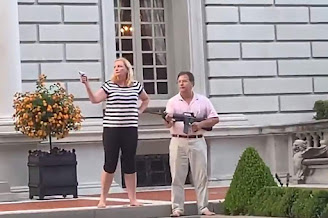 Some things never change. Good Black and Latinx people who know how to behave are more than welcome to work in the big house among the master's fine things, as long as they remember their place. As long as they shut up and sing or play ball; as long as they speak from the script that was written for them; as long as they denounce where they came from; and as long as it is profitable for them to denigrate the rest of us in the fields as trash. I have always wondered if they earn any extra for accusing us of mental enslavement while they are driving the buggy or cleaning the kitchen.

I'm not calling names, but I am calling it as I see it. We're called thugs and Marxists for demanding justice in the streets when a Black man is paralyzed by bullets to the back for breaking up a fight. No one will mention Jacob Blake during this blow job of a convention, just as no one will mention Herman Cain, one of their own who joined the growing number of COVID casualties this Regime has shrugged off as within the acceptable range of death. They've invited Daniel Cameron to address the convention, the Kentucky Attorney General who won't take action against the officers who killed Breonna Taylor. Their respect for Indigenous people extends to invoking the name of Sitting Bull while gloating about shooting off fireworks at Mt. Rushmore on land that was stolen. Oh, and they've invited the kid who smirked in the face of the indigenous veteran at the Lincoln Memorial, so there's that.

This is why we're not buying the snake oil from Mr. It Is What It Is. People of color know all about false promises via glass beads, 40 acres and a mule, the Trail of Tears, separate but equal, and #BeBest. I can't speak for anyone else, but nah...

Posted by Ayanna Damali at 9:50 PM