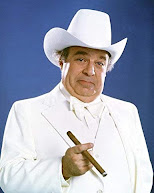 :
For someone who did not watch The Dukes of Hazzard as a child, I sure do recall a lot of details about that show. First, I vividly remember the theme song and the opening sequence. I remember that there were two Duke  boys (Bo and Luke), an Uncle Jesse, a cousin named Daisy, some dude named Cooter, a sheriff named Roscoe, and this guy --->
Secondly, my Dad absolutely forbade us to watch this show in his house, so the only way I ever came to vaguely recall any of those characters was from watching it at my grandmother's house. There were no such restrictions on us over there, so the third thing I remember was that the show came on Friday nights after The Incredible Hulk. And the reason why this seemingly random memory resurfaced was because a TV pundit referred to the current White House occupant as a plantation owner. And honest to goodness, of all the images to pop into my head upon that very apt description, my mind settled on Boss Hogg...
Not an actual fictional slave owner mind you. So not Benedict Cumberbatch or Michael Fassbender from 12 Years a Slave; not Leonardo DiCaprio from Django; or hell, not even Mike Brady (Robert Reed from the original Roots).
In response, I was going to tweet a gif, but my Kid cried out in some untimely non-urgent five year old distress, so the moment passed. Days later, someone posted this article about a small town mayor in Luray, VA who made an offensive quip about Joe Biden's potential running mate. After I posted this response on the Facebook page, I was primed to move onto something else, but again my subconscious brought forth images of Boss Hogg. This time, I imagined him standing on a makeshift platform surrounded by crooked minions as he mocked the absurdity of a Black woman as Vice President. Then I had an epiphany, and thus, the fourth reason why this imagery came to mind--how in some rather ridiculous alternative reality, that show is a perfect metaphor for current times.
Of course, Donald Trump is Boss Hogg, just as he manages to embody several other cartoon villains from popular culture (and I have written pieces on several): Yosemite Sam (pronounced Yō·'sim‧i‧tee, by the way) from the classic Looney Tunes; Montana Max from Tiny Toon Adventures; the Joker from the first Tim Burton Batman movie; Biff Tannen from the Back to the Future movies; Kreese, the evil sensei from the original Karate Kid franchise; and Governor Ratcliffe from Disney's Pocahontas. However, before we deconstruct the accuracy of this latest caricature, let's focus on the other characters and how they represent the perpetual nostalgia America has for the South, even at its most outlandish and absurd.
Those Duke Boys
I don't remember why they were always in trouble with the law since the day they were born...but isn't it convenient how good looking white boys can do almost anything and get away with it? Were they petty thieves, gamblers, heart-breakers, or moonshiners? They certainly were never referred to as thugs, so in the hypocrisy we have come to expect from our fellow Americans, everyone hoped they would get away with whatever shenanigans crimes they committed.
Uncle Jesse
An old moonshiner garners the kind of empathy that an old playa never would. My best guess is that he was just like those young Dukes in his prime. He probably went to jail a few times too, but nothing so serious as to condemn him to a life behind bars. No, his career in crime long over, he's just the harmless enabler, nowhere near as dangerous as the Black man deemed ineligible for parole and currently rotting away in a Louisiana prison for a botched hedge clipper robbery.
Daisy Duke
If only women were more content to saunter around in cut off shorts, kitten heels, and bikinis instead of trying to run for President. What happened to the good old days when men set the parameters of acceptable sexuality and women knew their place was to serve as hood ornaments instead of serving WAP...
Roscoe P. Coltrane
The sheriff wasn't technically the law inasmuch as he was the Man and because y'all loved those good ole Duke boys, your demands for Law and Order didn't apply to them. And despite the fact that Coltrane and his deputy (Enos, the dipstick) were the equivalent of Barney Phife and Goober Pyle, their jobs would have remained secure unless they killed one of those Duke boys in an illegal choke hold.
Cooter
I haven't thought of an appropriate analogy for him yet, but I know he's the guy that fixed the car. And that he also served in Congress with the guy who portrayed Gopher (same era, different show) which seems all mixed up and crazy when you really think about it.

The General Lee
The car emblazoned with the emblem that fueled my Dad's ire, was the real star of the show. That car represents everything that is both great and terrible about America--looks good, performs fantastical feats, but always needs repair (and if you think about it, you will get the symbolism).
Boss Hogg
Again, this is not based on my knowledge or recollection, but Jefferson Davis Hogg was the "boss" in Hazzard County, which was both a political position and an economic one. He despised the Duke boys and manipulated the law to go after them. But with an inept sheriff and local sentiment on their side, he never caught them. But he was rich, so that was enough to keep this nonsense on the air for seven seasons and a movie remake.
Let's just hope this current incarnation of the show gets cancelled in November.
Of course, the drawback to this analogy is that it doesn't quite follow, because I'm pretty sure that Boss Hogg wasn't a plantation owner in 1979. Among other things, I don't think there were any Black or Latinx people in Hazzard County as it was probably one of those sundown towns. Even if my Dad hadn't been so adamant against us watching it, I cannot imagine being a regular fan of a show in the 80s about a jumping car that didn't include dynamite and Mr. T. And since I was not a regular viewer, I didn't recall that there were two deputies (I only remembered one, Enos the dipstick); that there was a second set of Duke boys because of a contract dispute; or that there was a Saturday morning cartoon spin-off. I had zero interest in seeing the 2005 movie, so if you were/are a die hard fan who wants to fight because you disagree with my analysis, you got this.
Ironically, the nostalgia for this show and everything it represents is so in line with pandemic/racism denial in 2020. It is the same as being offended by the proposed name change for the Washington football team--despite being told that the original name is offensive, some of y'all insist that your offense over being offensive is more offensive than offending the offended. Yep, I said what I said.
As far as I'm concerned, if you can stand to watch a full episode (or a two hour movie) of this crap, have at it. I'm sure there is some obscure Black intellectual who would be willing to offer a disclaimer to help ease your conscience if need be. But those good old days of naming everybody after Jefferson Davis, marginalizing women as eye candy or hired help, and allowing joy-riding white boys free reign over everything are coming to an end. Whatever sad racist/sexist insults you have left to hurl in frustration, whatever pathetic last gasps of hegemony you seek to exert, whatever hare-brained suppression tactics you intend to unleash,

Nothing good came of Boss Hogg's machinations, as nothing good comes from allowing a fool to control the reigns of power, no matter how rich he is. Nothing good ever springs from the single-minded pursuit of absolute power. Nothing good results from having two or three different sets of rules and expectations for similarly situated people. Those Duke boys should have been held to some level of accountability for their roguery. And if ever there was a movement to defund the police of Hazzard County, that might not be such a bad idea.
And for what it's worth, having a Black woman as Vice President is no more ludicrous than electing a guy named Cooter to Congress.
Posted by Ayanna Damali at 2:56 PM