Meghan Markle, future Duchess of Sussex. An American in the House of Windsor! Her Royal Highness, Sista girl M&M from Compton, is now going to have her own postage stamp and her image commemorated on collectible thimbles and teapots!

It was just a few days ago that I branded the latest announcement from Kensington Palace that there would be no daily updates on Prince Harry's love life as #RoyalNewsYouCantUse. I even quoted my Dad, whose knowledge of tabloid headlines is usually quite surprising and random, when he suggested that any upcoming Royal weddings needed to occur after the Queen and Prince Phillip's 70th Anniversary and the birth of William and Kate's third kid. My take was that we're all intrigued, but until there is a ring, nothing to see...

Y'all there has been a ring for like a month! And she looked pretty darn radiant as they casually strolled into the gardens to wave at the press, and then quite ecstatic to finally be able to flash that ice for the world to see.

Y'all, can we wrap our Busy Black heads around the fact that Prince Harry already wakes up next to a woman wearing a silk head scarf with a scalp moisturized by coconut oil?

That when they put together that wedding guest list, they will have to invite and sponsor several of her Compton cousins? And that they are going to need to reserve a section of the church for the delegation of black church ladies coifed in their peacock and ostrich feather church hats paired with matching satin suits accented with sequins and pearls, waving cardstock church fans depicting Jesus, Martin Luther King, Jr, and the Obama family? 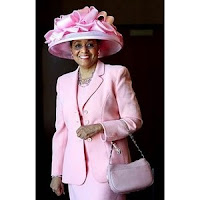 And that the Obamas will actually be there, whereas Melania Trump will have to watch on TV like the rest of us commoners?

Does everyone get that there will be little curly haired ginger brown babies running after great-grandmum's corgis around Buckingham Palace?

Every bad joke we made about barbecues at the White House with the election of Obama now makes the reverse transatlantic voyage across the pond for British audiences. So we'll let our West Indian and Afro-Brit cousins translate the cultural equivalencies of having a black woman in the Royal family. She's American though, so we are still expecting some YouTube footage of Auntie Ree Ree teaching Prince Charles and Duchess Camilla the wobble. And right now in heaven, Princess Diana, Michael Jackson, the Queen Mum, Prince, and Elvis are working out that seating chart? (If not Elvis then Tom Petty, because we can't forget that Meghan's dad is going to have some say in this too.)

Which brings us back to reality and the controversy of her racial identity. Yes, to every black person on the planet, Meghan Markle is neither half white nor biracial. She is BLACK. And none of us gives a damn about her blow out, her fair complexion, her white ex-husband, or her suburban upbringing.  She can self-identify as she pleases, so if she wants to call herself biracial, we will just nod our heads in collective understanding that her choice is actually more about making white people comfortable than it is about actually denouncing anything. We've already seen her yoga posing Mama with the hair twists. They're from California...it's called La La Land for a reason.

To claim her as one of our own does not negate her father in order to elevate her mother. Contrary to what other folks think about racial identity, most black people are rather pragmatic in understanding how the world works. We didn't devise the one drop rule--it was bequeathed to us by our British/American colonizers/owners. So we're not going to allow y'all to revoke a 500+ year old rule just because it is convenient to support the lies you need to believe about racial purity. Phuck that. We all know about Queen Charlotte. And to those few whiny pants blackademic hoteps and bitter boos who are urging us not to celebrate Meghan because of their own issues with racial identity, phuck y'all and Sammy Sosa too.
Posted by Ayanna Damali at 8:29 AM