My head and my heart hurt from this video footage of a six-year old being arrested in Orlando (the incident occurred back in September, but the recording was recently released). She apparently had a violent tantrum at school due to some underlying health issues, so the police were called.

On an unrelated, yet in a similar vein, a tweet from Moms Demand reminded me that it has been eight years since Trayvon Martin was gunned down in his Dad's gated community by a vigilante (whose name I refuse to acknowledge). The wannabe neighborhood watchman initially called the police because Martin looked suspicious, and sadly we all know the tragic result of that encounter. I'm sure that if I keep digging, I will find other incidences to depress me--like the video footage from the arrest of a family after their four-year old held onto a doll from a dollar store in Phoenix. Or I could invoke the memory of twelve-year old Tamir Rice, who was playing with a toy gun in a Cleveland playground, but wound up dead because the police officer thought he was a threat.

Recently in the Atlanta airport, my daughter had a tantrum over a toy that we refused to buy and the intensity of her behavior escalated to the point where I got nervous that we might get into trouble. As in we-need-to-speak-to-you and yeah-you-might-miss-your-flight kind of trouble. Maybe it was an irrational fear, but in an era of ubiquitous security and cell phone cameras, who knows. Because public discipline of a Black child in mixed spaces can have untold consequences beyond viral video infamy. So I carried her off to the bathroom for a 'talk' which was indeed just a talk...

Welcome to the reality of constantly walking that tightrope between damned if you do/damned if you don't--that purgatory where your child is deemed a risk to public safety for existing and you feel constantly judged and impotent as a parent.

I don't know what caused that girl in Florida to lash out in such a rage at school, but whatever it was, it disheartens me. That could just as easily have been my daughter on a bad day when I have deprived her of something she wanted. Like the day we threatened to leave her on the beach when she refused to stop playing in the sand. Or the other day when I told her that she could not have an ice cream bar, so she screamed and flailed and cried for 20 minutes straight. You might be reading this and thinking spare the rod, spoil the child, and all manner of old-school parenting responses.

And that's part of the problem. Old school parenting doesn't work anymore. It causes more harm than good according to studies and outcomes. Enough of us live with the trauma of abuse to know that beating our children into submission will only make them more resentful than obedient. So we rely on more creative punishments, rationalization, prayer, wine...because failure could mean that I end up talking to my child through several layers of glass on a prison phone. Or I'm selecting a coffin.

Maybe this is just my scream into the void. But it cannot be acceptable that, at least with respect to our children, our shortcomings as parents come with the threat of police intervention. That successful Black motherhood (in addition to surviving childbirth) and fatherhood are judged by not having your children arrested or killed prior to reaching the age of 18. That instead of a village that nurtures and supports our families, we live in a police state.

Why was it deemed necessary to call the police on a child? And if that was the appropriate protocol to bring a volatile situation under control, then what were the next steps taken to keep the child safe? When the officer arrived on the scene, the child was calm. The child became hysterical again when told that she was being arrested, but she did not respond with violence. So was the point here to frighten her into more acceptable behavior? Might that have been accomplished without arresting her and subjecting her to that trauma? The officer lost his job, but was he a scapegoat for a system that would have otherwise applauded his actions absent the public outcry? And what about the child--what services will she and her family receive? Obviously she needs help... 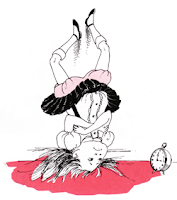 So yeah, I'm going to say it because if she had been WHITE, none of this would have happened. Her behavioral issues would have been identified and diagnosed. She would have been at a special school where administrators would have known how to diffuse her outbursts. Her parents would have been called (not the police), and there would have been meetings to determine how best to address her needs. This entire episode would have been recast as a bad day, kind of like this cute story (which happens to be on our bookshelf, courtesy of a local library program). Or she would have become the inspiration for a beloved children's lit character like Ramona Quimby or Eloise.

Black children deserve to be children! Our children deserve the chance to grow up to be fearless and bold, and in the process they deserve to be irrepressible and a little wild. Childhood is a brief moment in the span of a life, and God-willing that a Black child gets to live a full life without fear and trauma. God willing that despite this episode, this little brown-skinned girl grows up to be free.
Posted by Ayanna Damali at 4:55 PM