The Road to Perdition

The current occupant of the White House (whose name shall not be written here), did something last week that was beyond vile, even for him. So I am going to pray for him.

Yep, you read that right. I won't call him out by name because God knows my heart, but I will write his initials at the bottom of my weekly prayer list. From now on, I will whisper a quick #BeBest whenever I encounter his orange scowl glaring back at me. I might even go to the Shrine to buy myself a rosary. Yes, my beloved, he finally did something to earn my sympathy for his wretched and venomous soul--he mocked God. He took to the stage at the National Prayer Breakfast to crow about his acquittal, and then had the temerity to publicly proclaim that Nancy Pelosi, a devout Catholic mother of five and grandmother of nine, was lying when she said that she prays for him.

And y'all, he didn't drop dead on the spot.

I tweeted about this because his hubris is what my Great Aunt Sarah would have called the living gall. That this man, who sounds like he needs extensive practice in even invoking God without accidentally, on purpose saying who me used the occasion of a prayer breakfast to attack the faith of someone else is contemptible. That this modern-day King Nebuchadnezzar would suggest that he has been through Hell because he was being investigated for doing what he did, and then stacked the deck so that he could get away with it is laughable. That this thin-skinned, gold-plated phony would form his lips to question the faith of others, knowing this his hope is built on nothing less than lies, spray tan, and the fear he riles up in his followers is Machiavellian. The living gall.

I am not a Catholic, but my Dad is a devout Catholic and I went to parochial school for six years. I don't personally know Nancy Pelosi, but I did come into contact with her on a regular basis when I worked on the Hill twenty years ago. Of course I am an admirer, but I can confidently make this observation based other Catholic women I've known, like my Great Aunt Sarah--Nancy Patricia D'Alesandro Pelosi from Baltimore is the real deal. So a man who once had his own beliefs called into doubt by the Pope (and rightfully so in hindsight), is in no position to analyze someone else's faith.

Let me break this down for you--Catholic women, who incidentally are very much like the Black Protestant women I know and have known, pray for everybody. EVERYBODY. The Lord's Prayer (Matthew 6: 9-13), which gets a daily recitation by most Catholics in some form or another, includes the line: forgive us our trespasses as we forgive those who trespass against us. That's not a throwaway phrase. During Mass, the priest makes a point of reminding the congregation that it is the duty of the faithful to forgive even our enemies. Forgiveness is a central component of Catholic dogma.

Thus, every day that Pelosi and every other Christian utters the words of that prayer, we are interceding for him. As far as I am concerned, attacking her like that as she was seated on the dais less than 50 feet away from him was an attack on Catholicism, and by extension Christianity itself. Of course, that isn't even the bottom for this President, who has no respect for anyone or anything. He also attacked Mitt Romney, whose faith I know a lot less about, but am no less convinced of his sincerity. So it should worry everyone that our country is being led by a craven, remorseless, haughty reprobate, and we are headed for much worse than a collapse of the American empire.

We are in the fiery furnace (Daniel 3). The question is not whether we will be recovered unscathed or unsinged from the flames. The question is whether this evil king will repent or go mad. We know that he won't repent in the short-term, as his lust for vengeance never quenches. He gleefully destroys norms and lives for sport. He openly mocks and rejects the notion of forgiveness, and that's why we must pray for him. Not for the ill will he deserves, but that a measure of grace might cause him a Saul-on-the-road-to-Damascus conversion before it is too late and his unending quest for retribution consumes him.

Mind you, praying for our enemies does not mean that we won't fight against them. It is because we pray for them that we have the ability to stand and resist. Praying women like my Great Aunt Sarah, my Black Baptist grandmothers, Speaker Pelosi, and Ann Romney (yeah, I'm including her in the prayer circle too) weren't/aren't easily cowed by the bluff and bluster of megalomania. Some of these women have faced much worse than tough talk and insults--fire hoses, riots, chronic illness, personal tragedy, raising children, etc...

Which is why it is important to note that we end the Lord's Prayer with the plea to deliver us from evil. What that deliverance looks like is entirely up to God, and we accept that it might not come in the manner that we would like, but we continue to make the request. This DESPOTUS might believe that his acquittal was a deliverance of some kind, but that was entirely too easy. And one thing praying women know is that troubles don't last always, and blessings and miracles are worth the wait. 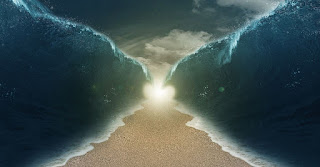