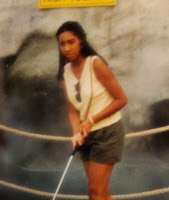 Before I divulge those reasons, take a look at this old picture of me from more than 20 years ago. I am wearing braids, and since I look a little younger than my actual age, I was often told that I was a doppelganger for Brandy. At the time, she was starring on Moesha and she had a budding music career. Our alleged resemblance becomes an important factor in this story:

One summer during an outing in Manhattan, the then-boyfriend (now Hub) and I ended up near Central Park at a Gap. I don't remember why we went into the store, but we were there for about five minutes when I spotted Luther Vandross. Yes, THE Luther Vandross. As this was the era before cell phone cameras and smartphones, it was just my best guess that this tall guy who looked just like Luther was in a Gap with his nephew trying on clothes. Luther freaking Vandross!!!

Meanwhile, he seemed a bit perplexed by our presence, which we assumed was us violating the New York Celebrity Code of noticing, but not drawing attention to someone famous. So we went about the business of fake shopping (because whatever I thought I might have been looking for at that point was irrelevant). We also noticed that the sales people in the store seemed to be acting weird towards us, so I picked something out and asked to be shown to a dressing room in another part of the store.

It was then that the salesman helping me revealed the source of all the nervous energy. Apparently, another sales person thought I was Brandy and she had alerted the others via walkie talkie to that fact. Even Mr. Vandross wondered if I was Brandy, so his stares were part of his attempt to determine what I was shopping for at the Gap with some dude he thought was my body guard. Meanwhile, no one else had noticed that the actual famous person in the store was Luther freaking Vandross buying jeans with his nephew. While we were discussing this, Vandross had left, and all of us (including several other sales associates) shared a laugh at what could have been the plot of a very special mistaken identity episode of Moesha. And to this day, I am amazed that a Brandy look-alike caused a bigger stir than Luther freaking Vandross buying jeans for his nephew.

Whew. I have been waiting to spill that tea for years. That is a 100% true story of how I am always fame-adjacent and reason number one why Brandy gets a playlist. She is my doppelganger imaginary younger sister.

Reason number two: she is one of the few R&B singers from the 90s whose career has managed to survive. Brandy was a legit child star who was also a singer. But not in the way that every other Disney starlet was a wannabe singer, but the real deal. She transitioned into adulthood in spite of the various associated pressures and without the same career-derailing growing pains as some of her peers.

On her birthday, I posted this clip of Impossible, from Cinderella in which she starred alongside her mentor, the great Whitney Houston in 1996. It was in tribute to both of them, as that was the same day that Houston died back in 2011. Even now, there are times when I still see Brandy as this precocious young girl, despite the fact that she and I are only a few years apart in age. Or I look back and marvel at how she held her own singing with another iconic diva, Diana Ross, on Love Is All That Matters in the film Double Platinum (1999). And we've already established that she was the star of her own sitcom, Moesha, for six years.

Brandy also popped up on my radar recently as tributes to Kobe Bryant included the memory of them having gone to the prom together. And that made me think of Brokenhearted (1994), which she sang with Wanya Morris from Boys II Men and that got me to thinking about that crazy story Adina Howard told in her Unsung episode. And that got me to thinking about how Alicia Keys and Boys II Men performed that beautiful impromptu tribute to Bryant at the Grammys, which was soooo much better than their last award show appearance. And just how damn, the 90s...

Brandy was big in the 90s. And for that other young woman pictured above, the 90s was her coming-of-age decade, so any excuse to look back fondly to that uncomplicated time is welcome. Here are a few of my favorite early Brandy hits:

In the 2000s, life changed for both of us. I got married and Brandy had a child. She had some troubles, but appeared to rebound from them out of the spotlight while her brother became a more ubiquitous presence on reality television (which reminded me a lot of how my parents also made me take my younger brother along with me as boy repellent). She released a couple of albums, but fewer hits:

Because her creative output in the last two decades has been mostly as an actress, I've been thinking of a third reason for Brandy to receive this tribute. Now that she is a fully grown woman, it's time to give her the chance to become a fully realized talent. That doesn't mean that she should walk away from the music business, but maybe she should leave the purgatory of reality television to her less talented brother. It is time for her to be given broader opportunities, in line with her run on Broadway as Roxie Hart in Chicago in 2015 and 2017. She has so much more to offer, and where else would her talents as both an actress and a singer receive the attention she rightfully deserves?

And perhaps maybe we can accidentally run into each other in New York City to see if we still favor. Now that I have shared that Luther Vandross story, I need a better anecdote and pictures.

Posted by Ayanna Damali at 2:28 PM