You know how there are singers that have been in your life for so long that you take them for granted? As in, you know their music and that they had significant influence, but the fact that they have been so familiar for so long means that you know better than to pay tribute to their work with a hasty belated birthday tribute...

To be clear, Roberta Cleopatra Flack, who was born February 10, 1936, is a different kind of musical diva--not the most prolific or beloved like some of her peers, but definitely not the kind of unsung artist that merits an hour-long documentary. On the contrary, she's one of those musicians that most people are unaware that they know. A lot of her music has been covered by multiple artists, and I think that for a lot of my peers, she is better known for her duets with similarly understated R&B balladeers. To some, her music might be disregarded as the kind of background white noise that one might hear in a department store or in a waiting room, To others, Flack's music is the embodiment of romantic love, a pure and almost naive emotion to build one's career around; yet, in her prime, Roberta Flack sang love songs because once upon a time, people used to fall in love.

Her classic well-known solo hits were all released in the 70s. Often they were covers of previously released songs such as Will You Still Love Me Tomorrow (1972). This was one of the first big hits written by Carole King and Gerry Goffin, originally performed as a faster-tempo doo-wop song by The Shirelles in 1960. King released it as a ballad on her iconic Tapestry album in 1971, and in 2004 Amy Winehouse released a version that definitely demonstrates her respect for doo-wop, pop, and Flack's soulful version. (If you want an interesting nod to the original, check out Leslie Grace's 2018 release.)

Flack recorded the original version of Feel Like Makin' Love in 1974, but it was also covered several times that same year. I like these two instrumental takes by Roy Ayers and Bob James, as well as this funkier version released by Marlena Shaw. But I have to be honest--this this pop version released by George Benson in 1983 is meh, even though it sounds a lot like something Flack and Donny Hathaway might have recorded as a duet. D'Angelo planned to record a duet with Lauryn Hill that never materialized, but his 2000 neo-soul version is a perfect nod to the original.

It was fascinating to learn that Flack's version of The First Time Ever I Saw Your Face (1971), was originally a folk song that had been written in 1957 for Peggy Seegar (yes, she is related to Pete). It was recorded several times, most notably by Peter, Paul and Mary and gospel duo Joe and Eddie (1963). While I can clearly hear those influences, hers has become the definitive cover upon which others are based. Compare these two versions by Isaac Hayes and Johnny Cash, as well as this modern take by Celine Dion.

Finally, Killing Me Softly (1973) is probably her best known hit, a classic ballad that has aged like fine wine. I remember hearing it regularly on the Quiet Storm until this Al B. Sure remake in 1989, which then was remade in 1996 by The Fugees. Both versions are dope, and that is not my nostalgia speaking (okay it is). So color me surprised to learn that Nancy Sinatra (released in 2013) and Perry Cuomo (1992) both recorded this song, which reminded me of the Anne Murray (1973) easy listening version that I recall from 70s AM radio. Also, I was fascinated to learn about this bizarre history of the song's original singer, Lori Lieberman (1971)...

I posted It Might Be You (1994) to the Facebook mini playlist, because I was looking for a more contemporary release. I recall this version from Waiting to Exhale, which referenced the fact that it had been featured in Tootsie (recorded in 1982 by Steve Bishop). Patti Austin's spare version on her 1992 live album is simply beautiful.

And speaking of songs from movies, who remembers Flack's Just When I Needed You from Bustin' Loose (1981)? Or what about the theme song to Valerie/The Hogan Family? Anybody? Just me? Ok...

I did not include any duets on the Facebook playlist in order to highlight that Flack had been a respectable solo artist in her own right. But it is impossible to overlook the fact that some of her best work was in collaboration with other artists, most notably the late Donny Hathaway (1945-1979). Here are a few gems from their catalog: 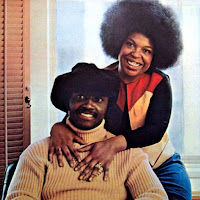 Back Together Again and You Are My Heaven (released in 1980)

After Hathaway's tragic death, Flack teamed up with Peabo Bryson, and they released a few respectable hits in the early 80s, the biggest of which was Tonight, I Celebrate My Love (1983). They also recorded a version of If Only For One Night in 1980, before it became a hit for Luther Vandross in 1985 (which was originally written and recorded by Brenda Russell in 1979).

Speaking of the late Luther Vandross, who worked with Flack and several other artists as a backup singer in the 70s, he wrote You Stopped Loving Me, which appeared on both of their albums in 1981 (her version was included on the Bustin' Loose soundtrack). But can I be honest that I was more excited to find their collaboration on this jingle for Löwenbräu beer? I am SO Eighties right now...

One last thing I wanted to share--while compiling this playlist I learned that Flack was scheduled to be honored at the most recent Grammy Awards with a Lifetime Achievement Award. Since suffering a stroke back in 2016, her public appearances have been rare. However, in preparation for the telecast which aired on February 26, she gave interviews to The Guardian and the New York Post. She was also the subject of this comprehensive feature on NPR's Turning the Tables on her birthday, which offers more insight into her career and her life. I didn't watch the Grammys, but I saw that she appeared on the red carpet, so perhaps it is fortuitous to get this opportunity to honor her work in this moment.
Posted by Ayanna Damali at 7:54 PM