I have mixed emotions over the passing of Barbara Elaine Smith, known as B. Smith to most of us who came to regard her as the Black Martha Stewart. I know that description seems diminishing in some respects, as legend has it that Stewart patterned her lifestyle empire on what Smith was doing (but we know how these things go). But either way, B. Smith was special to us. She was one of our first Black supermodels. She was our elegant sister, stylish Auntie, and overall fabulous friend who seemed to do everything with panache. She encouraged us to make use of those fancy serving dishes we inherited in that old dining room curio. Her cookbook gave us low calorie versions and interesting takes of the soul food we would serve on those antique platters and plates (because yeah, we bought her cookbook and actually used it).

To Washingtonians of a certain age, her restaurant at Union Station was the place to go if you wanted to impress out of town visitors or celebrate some momentousness occasion. According to Al Roker, the same was true about her New York establishment. A few years back, the Hub and I ate at the Sag Harbor outpost because we were vacationing there. Along with a few of her friends, we celebrated my Mom's 65th birthday at the Union Station location during its final year of operation. Sadly, it was less than a year later that Smith would reveal her own Alzheimer's diagnosis.

My mixed emotions are not about her transition inasmuch as they are about the way people have responded to her death by renewing their venom against her husband and caregiver, Dan Gasby. It strikes me as a bit ironic that in the wake of Kobe Bryant's untimely death last month, it was too soon to discuss the rape allegations that he had faced in 2003 (or to call him a rapist or to say anything about him that wasn't effusive praise) yet here we are. I know Gasby is still alive, so maybe these are apples and oranges, but in my mind, we are still in the produce aisle.

And folks have opinions on everything. So damn. The man lost his wife. Show some respect.

I read the statement he released, in which thanked the hospice doctors and other friends for their support, and my heart sank at the word hospice. For anyone who knows what that means or who has gone through that process, Smith had apparently been in rapidly declining health in recent weeks. Which means Dan Gasby has been watching his wife die. Let that sink in before you continue to read. I hadn't been paying close attention to the activity on their page lately (shifted to Instagram), so I have no idea if this was a sudden illness or the natural course of things. Having just experienced a hospice situation myself, let me say the death watch/wait is agonizing.

Now, what you choose to think about him is your prerogative, and if you decide to share those thoughts on social media, I am going to issue the same missive we dispatched to the folks who were eager to remind the world of Kobe Bryant's past mere hours after he died--STAND DOWN. Now is not the time for you to weigh in with your ill-timed barbs and poison-tipped arrows to strike at a man who just lost his wife. Fuck your feelings about his personal life, which is still none of your damn business. To everyone who already felt the need to bash him in his hour of grief, you suck.

I said my peace on Dan Gasby previously, a little over a year ago in fact, so I will try not to repeat myself too much, but let's real talk this. In the year since he revealed that other side to his personal life, that's all everyone seems to discuss, which is fucked up because there was a LOT more he was sharing than just his bedroom situation. He was telling us that Alzheimer's is not just about the person who receives the diagnosis--it upends the entire family unit. It destroys one life slowly, while simultaneously altering the course of everyone else's lives in the process. Ask me how I know this.

Alzheimer's is an urgent public health crisis, one that will do more damage to more families in the coming years as Baby Boomers and Generation Xers age. Learn the facts for yourself via the Alzheimer's Association. There you will learn that women are more likely to develop this disease, it isn't just memory loss, and that it can strike earlier than what we consider advanced age. B. Smith and my Mom developed early-onset dementia in their 60s. They were both diagnosed at age 64, which is one year shy of retirement age and Medicare eligibility. Right now, while some lawmakers are suggesting that we can bump the age to 67 to account for our longer life-spans, consider the financial hit your family could take without affordable health care insurance. Because Alzheimer's doesn't care if you are a Democrat or a Republican, it is an expensive disease to diagnose and treat, and currently, there is no cure. It is 100% fatal, and despite whatever fish oil/crossword puzzle bullshit you've read, it is not preventable. Let that sink in.

That means, many of us will be caught in a financial tsunami of navigating long-term health care costs, tuition for our kids and/or grandchildren, mortgages, and all manner of deferred dreams that could be affected by an Alzheimer's diagnosis. Then there is the matter of caregiving and how that burden disproportionately falls to women as well. But if we are the ones more likely to be stricken, then that means our caregivers will be our spouses or our children or an underpaid stranger. And if you need to visualize what that means, then Dad will be caring for Mom. Maybe he will have the help of a child (a daughter usually)--someone who has the flexibility to forgo earning potential to be on call. Or if they have the means, he will hire in-home assistance, who might be the same person for the duration of the illness, or several people in and out of the house (with unfettered access to all of Mom's pretty things). Or worst case scenario, Mom will end up in a facility where someone might get around to seeing her once or twice a week.

Back to B. Smith, because I know that I tend to think of her situation and my mother's as the same, but I cannot help but to see the parallels. Her family's choice to be transparent and open about this journey gave me some measure of courage to become more open about my own journey. I am still on it, and in spite of the hardships, I am grateful.

But don't get it twisted--this is not easy. Which was the other truth Dan Gasby was sharing when he opened his life for us to scrutinize. Male caregiving is not the societal norm, and he made some very public missteps in his approach, but bless his heart. It is not easy to watch someone who was so full of life and independence regress into an invisible shell. It is not easy to watch a vibrant woman who could have had up to twenty more years of a fabulous life ahead of her wither away in six years. It is not easy to wake up one day and accept that your quality of life has also irrevocably changed. Friends and relatives stop calling and visiting. It becomes a lonely, monotonous existence. Whether you agree or not, he had a right to maintain some semblance of a life instead of having to rebuild one from the ashes of grief and despair.

I know, his white girlfriend though. Yeah, Karma is a bitch and she is staring at all of us because we all live in glass houses. So instead of hurling rocks at his for what you think he's been doing these six years, why don't you visit that old aunt or grandmother or neighbor with Alzheimer's every week instead of once every blue moon. And stay for longer than 30 minutes to see if that doesn't change your perspective.

I'm done for now. My sincerest condolences to Dan and Dana Gasby, and every other relative and close friend of B. Smith who traveled this journey through Alzheimer's with them. This is a time for mourning, but also celebration. In Smith's honor, I might cook this week and serve it on my wedding china. With style! 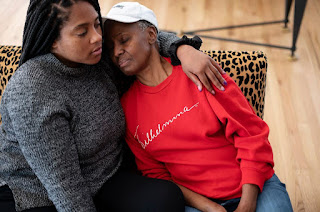 Posted by Ayanna Damali at 2:19 PM