Another Thanksgiving has come and gone. I got home this morning at 1am, after I chatted with my Dad and cleaned up my parents' kitchen. I was tired, and in that can't sleep mode where I was wide awake, sore, and trying to catch the last 30 minutes of both The Godfather II and Gone with the Wind (don't judge).

And then, as soon as both films ended, I was out like a light. Thankfully, I took the time to remove my makeup during one of the commercial breaks. I made a mental list of all the things in my life for which I was grateful and during another commercial break, I started to write this post to share that list. But as I said, as soon as Scarlett O'Hara declared that tomorrow is another day and the ending credits scrolled, I took her at her word and closed my laptop.

Today finds me no longer basking in the afterglow of feeling accomplished and satisfied about pulling off a pretty decent Thanksgiving gathering. Today, I was awakened by the Toddlersaurus' refusal to use the toilet. She lost one of her earrings because the Hub insisted that I should wait until she was calm to remove it (since he can't figure out how to do so). Apparently, her version of finding calm is to pee in her training panties and then spread her toys all over the living room floor. Such is life.

Earlier, I scrolled through my FB feed to "like" how all of you spent your day. I'm also looking to see who decided to brave the crowds to wade into the Black Friday madness. I'm impressed by your restraint, or perhaps your low tolerance for unnecessary nonsense. I've decided to avoid political news, if I can, until this evening. I'm sure whatever ridiculousness the President chooses to tweet about today will be sufficiently outrageous to occupy the news cycle until the evening.

I won't be making an endless list of gratitude as initially intended, but I won't complain either. Dinner was only half an hour later than I had hoped. The Toddlersaurus didn't get her nap, but she got to exhaust herself by running around the house with her favorite cousin. The Hub's macaroni and cheese (made with penne pasta...yeah, I know), was delicious. We will have the collard greens on Sunday since they didn't make it to the dinner table yesterday. My Mom ate her dinner and my Dad was pleased.

Although I'm still not ready to transition into Christmas, I accept that tis' the season. I'm going to check out a few online deals in advance of cyber Monday. I'll look for some Christmas music for the kid while I enjoy this marathon of first season Living Single episodes. I'll get dressed shortly to take my Mom to Arena Stage this evening. I'm going to plan my birthday outing and the Niece's 8th birthday bash. And I'm going to finish this piece with a shameless plug for my new Busy Black Woman side hustle--coffee mugs (sold individually $15 plus shipping). Email me at ayannadamali@gmail.com to place your order! 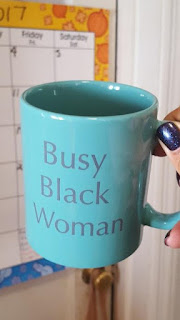 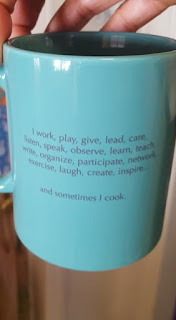 Posted by Ayanna Damali at 1:58 PM