I posted this article a few weeks ago on the Facebook page and am just now getting around to addressing it's central premise: Do women waste too much time worrying about their attire?

The easy answer is yes. But there are ways to streamline the effort so that the answer can become no. However, that isn't my gripe with the article. My gripe is Arianna Huffington's assumption that in order to achieve more success in our careers, women have to become more like men. I would prefer to argue about how we can better support women than to argue about what to wear.

Back when I was a college student, I remember that we were told to invest in a good navy or gray blue interview suit, a simple strand of pearls, some silk blouses, and a sensible pair of black heels. We were also instructed to invest in professional accessories to complete the ensemble, so everyone I knew set their sights on a Coach briefcase and a Montblanc pen/pencil set for graduation. This was the result: 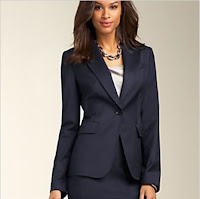 And for years, this was the look I adopted for interviews, important meetings, and court appearances. So to respond to Arianna's initial argument, women do have a professional uniform of sorts. And most of us adhered to that look until we got better paying jobs and could shop somewhere else other than Casual Corner and The Limited.

When we got a little more take home money and a real job title, some of us began to branch out to shopping for more options at department stores. We got to wear real name brands. We realized just how heavy that Coach briefcase was, so we ditched it for a lightweight designer commuter bag. We lost the Montblanc pen (or maybe it was stolen by a jealous colleague), but we soon realized that we needed several pens that work and that don't stain. We experimented with different looks because that navy suit got a little too tight once dinner was no longer ramen noodles every night. We bought scarves to add a pop of color. On one uneventful trip to the department store, we ventured past the jewelry counter and saw a really interesting bracelet cuff. On that same visit, we noticed that one of the cosmetic companies was offering free makeovers. Next thing you know...

And so, yes, women spend way too much time on our appearance. For those of us who have jobs that don't require a uniform, we have choices. Our definition of professionalism has changed over the years to accommodate weight changes, lifestyle choices, and children. We responded to the example of a glamorous First Lady in the form of Michelle Obama and decided to diversify beyond the structured suits. We determined that pantsuits could send the right message of authority and confidence. We rejected the casual Friday tendency to wear anything clean because we are grown ass women (except during the summer...some of y'all need to rethink those outfits #ijs).

Point is, women have earned the right to decide how much emphasis to place on our attire. So have men, and as we all know, plenty of men have rejected neckties, button-down shirts, and leather-bottomed shoes in favor of casual collared-shirts, khakis and Cole-Haan loafers. When I got pregnant, the Hub took over caring for his work wardrobe...and let's just say that the iron hasn't been used in a while.

Back to my issue with this premise that in order to succeed, women need to act more like men because we don't. Women just need the same opportunities as men. And that is a much harder effort.

It means enacting policies that support working mothers that don't pit them against the other women in the office without children. It means providing mentors who actually provide help and advice, not those insecure folks who feel threatened by promising young talent. It means setting reasonable expectations that allow workers to have a life outside of work. It means treating people with respect and clamping down on any conditions that create a hostile environment.

It should not mean that women must conform to standards that have little or nothing to do with job performance or advancement. And for the record Arianna, most women I know (including the Duchess of Cambridge) do repeat their outfits so umm, I don't get your point.
Posted by Ayanna Damali at 1:52 PM