I wanted to follow up on my impressions from Halloween 2017. And in what might be one of the shortest list pieces I will ever compose, you guys did pretty well:

1. Your children's manners were impeccable. Great job parents! Except for that kid dressed as a ninja who pushed past my kid for a ring pop (you're going to get cavities).

2. I started early, but a word of advice to those of you who want to have splashy Halloween decor: start working on your decor earlier than 5pm on Halloween.

3. I didn't see nearly enough imagination with those costumes. Everybody played it safe as a superhero, movie character, or princess (says the women whose daughter was Princess Jasmine, but on Saturday night she was a cat). Next year, I need to see a few kids dressed as Federal Indictments.

4. I went home early, so no slut-shaming from me. Not that I would do that, but if you were a$$ out in these streets, I missed it and the weather was mild. Carry on.

5. A group did knock on my door at 9pm. And I gave them several pieces of candy because according to the Hub almost no one else showed up and I didn't get home until after 8pm. I even set out a bowl and a sign at 4pm when I left the house, so what gives? Maybe it is because...

6. None of my neighbors distributed candy, despite the fact there are now at least six kids in our block. And that is why I gotta take my kid elsewhere!

7. How come folks don't know the Halloween rules (like my brother and Dad). Lights on = candy house. Lights off = no candy house (where there actually was candy inside, so now my kid has spent the week sneaking Milky Ways when Granddad wasn't looking).

8. No lame candy :)  And that includes the goodies that were on the porch of a former senator (one of the perks of trick-or-treating a block from the Capitol).

9. Books are an acceptable candy alternative from a used bookstore, I guess.

10. There is a major holiday between Halloween and Christmas called THANKSGIVING, not Black Friday!!! So, in case anyone wondered why the Grinch was so grouchy, that might be one of the reasons. 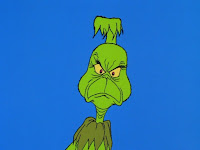 11. I am getting old and starting to repeat myself. Seriously...I wrote this in 2012 and this five years later the week before last. Why didn't somebody tell me?
Posted by Ayanna Damali at 8:00 AM