What's the Matter With Kids Today?

If a picture is worth a thousand words, it might also be worth a thousand gasps and sighs (although I am unsure if this represents $1000 of ruined product). And it's also worth at least a thousand different opinions about inattentive parents and the damage that can be done by one child who has been left to his/her own devices for a little too long. Idle hands, as they say. And trust, I could write a book about what my Toddlersaurus has done in the space of five minutes by herself...

I've already shared my initial assessment of what probably went wrong at the store, and again that is just one of a thousand thoughts with which you may feel free to agree or disagree. But there is this question out there posed by the photographer and subsequent internet mom shaming, which is how do parents go anywhere with their children without causing some kind of drama?

There is only one answer to that question--we can't.

Our parents and grandparents couldn't either, so before anyone tries to argue how much different it was in the golden era when children were always polite, well-behaved, listened to instructions, were respectful of property, etc...yeah, take a short trip with me down memory lane.

When we were kids, major department stores had toy departments and pet stores. There were electronics departments lined with television sets along the walls. There were record stores and book stores in the mall where we went to flip through albums and magazines. There were arcades and movie theaters. If we were out someplace where none of those amenities existed, sometimes we stayed in the car. Or at home.

At the grocery store, we began in the produce department where we were given grapes or berries (unwashed, right off the display). Maybe one of us was allowed to push the cart with a younger sibling seated up top. Or perhaps we were trusted to help find items on the list. At the checkout, we were rewarded with candy that was displayed by the register. If the trip was meant to be a quick one, we stayed in the car. Or at home.

Sometimes we had to go to places where there were no accommodations for keeping children distracted, like the bank or a repair shop. So we were given the warning not to touch ANYTHING, which was always a challenge and rarely was heeded, and which resulted in an inevitable meltdown. In response, we were disciplined in public, and the business was completed.

Yep, we were disciplined in public! We were also bribed to behave by promises to visit McDonald's or places like Farrell's. Snickerdoodles and pet goldfish were our rewards for staying out of trouble.

All of this was life before personal electronic distractions. Before parents had to be concerned about children being abducted or molested. Before parents were reported to Child Protective Services or became the unwitting stars of viral videos. Before malls began to fall on hard times and people began to do much of their shopping online. Before times changed.

Our parents had it rough because we were kids. However, the world accepted that children exist and enter into spaces that are not built for them, often out of necessity. Our existence was accommodated and tolerated, and it was understood that despite all of the distractions and activities that could keep us out of trouble, nothing was foolproof. A baby will cry, a toddler will tantrum, a school-ager will wander and explore, a teenager will get bored, and all of that is normal.

Our generation has it hard because we can't take our children's safety for granted, so we have to keep them essentially tethered to us in order to monitor both their behavior and our suspicions of strangers. And despite whatever herculean efforts we attempt to keep them out of trouble, isht happens. A display of glasses will crash and break because some kid bumped into the table (Bloomingdale's when I was eleven). There will be a harried Dad calling after his rambunctious kid to stop running and screaming, and to stand still so that they can leave soon (usually on a day with no Mom in sight). You will overhear promises to buy crap. You will see a child concentrating on a game or video on Mom's phone or ipad. And yes, some unsupervised kid might cause a lot of damage to the makeup display at the cosmetics store. 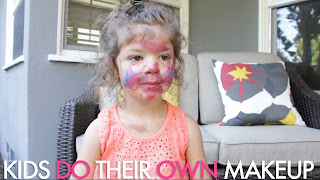