The Ism We All Tolerate

I started this piece the same week that Carolina Panthers QB Cam Newton was fired by Dannon for insulting a reporter with a sexist remark and maybe a few days before Hollywood mega-producer Harvey Weinstein was outed by an article in the New York Times for decades of harassing behavior. I had some of it written, but then every other day there came a new allegation, with the most recent notables being Mark Halperin, Kevin Spacey, and Louis C.K.

I couldn't keep up, so I will just set out my case and watch the chips continue to fall. It is dizzying, but hardly surprising that all of these powerful and influential men are being confronted with their boorish behavior. But this is the culture we have tolerated, driven by a relentless appetite (currently) for more news of sexual misbehavior and scandal.

My initial premise was to argue how sexism is the "ism" we tend to tolerate. We have very strong opinions about all of the others--either you are on one side or you aren't. Patriotism. Nationalism. Historical revisionism. American exceptionalism. Chauvinism. Trumpism. Capitalism. Racism.

But sexism isn't all that easy to define, categorize, or stigmatize unless the allegations are egregious. Take for example, a FB exchange I had the day after the Cam Newton incident. A friend posted an article to his page, expressed his opinion that the statement was problematic, and invited others to opine on the topic. And let's just say the lines were quickly drawn to forgive Cam's statement as not really sexist, despite the fact that it was.

And here is the thing--we can forgive Cam Newton for his dumb comment. But the one thing all women know is that sexism always starts with a stupid comment until it becomes a stray gesture by a revered old man who offers a friendly pat to someone's backside. Or it could be a series of uncomfortable requests, like a massage or forced affection. It could be meant as a compliment that is recalled as a humiliating experience. It could be bragging about what he can do if given the opportunity.

It is not just the overt acts, since those don't really clarify the matter. Apparently it was woven into the culture at FOX News that men could harass the women on staff with impunity. Harvey Weinstein's antics were such an open secret that nearly everyone in town was complicit. And with the balance of power at stake in the Senate, apparently a man can be forgiven for touching a child inappropriately, because the Virgin Mary was a child bride.

Marinate on that for a few minutes. Because I just went from a stupid remark to biblical pedophilia in two paragraphs. There are plenty of other behaviors I didn't explicitly offer up as examples, such as offering commentary about someone else's body or inviting someone to watch or participate in someone's personal sexual gratification...

We have spent the last six weeks exposing the misdeeds of powerful men, but it will be meaningless if we do nothing else to dismantle the wall we have built to protect all abusers from accountability for their actions. When we tell young girls from the earliest ages that boys will be boys, we send the message that the power to stop sexism requires evasive actions by us (the potential targets), and not affirmative behavior by them (the future harassers and abusers). We reinforce the message that in order to get along, get by, or maybe get ahead, we must exercise infinite forgiveness and patience, with no real guarantees (just ask Hillary Clinton how that worked out for her).

And that is the real problem of sexism--the excuses, the false equivalencies, the re-visioning of history, the defensiveness, the outright lies, the victim-blaming, and of course, the silence. A little over a year ago when I was talking to myself out loud in my little corner against supporting admitted sexists in their artistic and political endeavors, I recall feeling demoralized whenever I read alternative viewpoints. Our tolerance for sexism served the greater good, it was argued. By looking past the "allegations" (which are always just allegations), we could accept the philanthropy of Bill Cosby; celebrate the artistic vision of Woodie Allen and Roman Polanski; and maintain the quota of one by supporting the presence of Clarence Thomas (yeah, him too). Ignore the fact that our tolerance for sexism stigmatizes, marginalizes, encourages, tolerates, perpetuates, and ultimately normalizes reprehensible behavior. Because our Pu$$y-grabber in chief will make America great again. 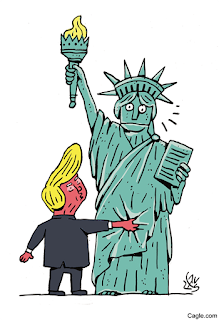 Posted by Ayanna Damali at 5:14 PM